I reached my mountain range about 6 pm, after driving for over 11 hours from sunny Ballina. Desperate to get home after 8 days away, I’d expected my mountains to have dried out a little.

Assuming the torrential nine inches we’d had before I Ieft would have washed away the short road, I headed round the long ridge way through the national park. After about 10 kms, I stopped: a gumtree had fallen, its top covering the road, very firmly joined to its downhill trunk, so immovable, and no way around it.

The short way it would have to be, no matter how rough. Back the 10 kms, then gingerly easing over ruts and washouts and slides down to the creek crossing, another 5 kms. Lucky the Suzi and I are a seasoned 4WD team. 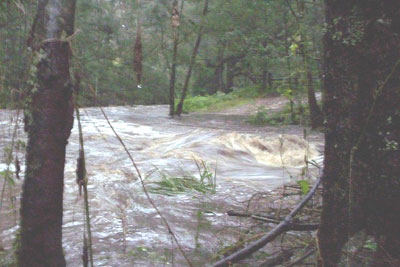 But no way here either.

I backed up to a friend’s house nearby. They said big 4WDs had been getting through, but my Suzuki is very small, and light. Marg insisted I eat while Barrie put on his armpit-high waders – took a flashlight – and waded. It was flowing very strongly, mid-thigh deep. Suzi and I do not like challenges, especially where it involves cold and wet and maybe swift passage downstream.

So I borrowed his large bush saw and headed back up the hill again, and back around the ridge road – again.

It was a great saw, heavy and sharp, and with the car headlghts on, I cut through the four upper branches.

On the road again – but not for long.

In the rainforest section, another tree was down. A dead one, wreathed in old vines, half sunk into the mud of the road. This time I had to kneel in the mud to cut through enough upper branches to be able to drag them out of the way. They were slippery, and so was the road.

It was no fun.

Had there been any more trees over the road I vowed to sleep in the car. But there weren’t.

I made it home by 8.30, lit the fire, changed my muddy clothes and poured a red. Only then could I say that it could have been worse – it could have been pouring with rain, as it clearly had been all the time I was away – another five inches in the gauge. 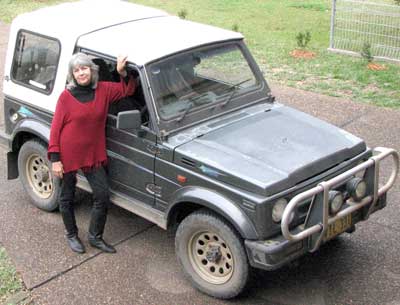 Suzi and me in town 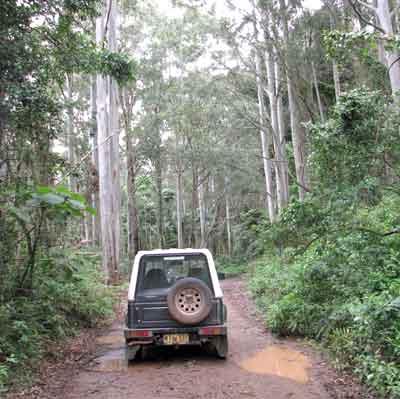 Suzi in her natural habitat

2 thoughts on “A little adventure for Suzi and me”