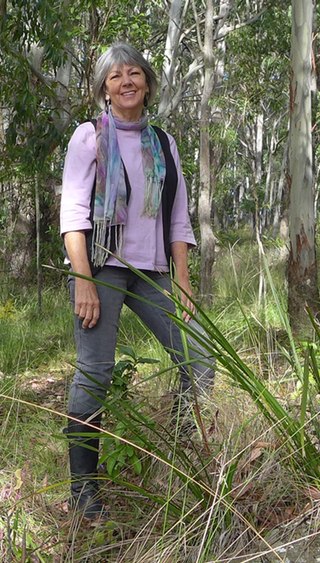 Sharyn Munro lived for decades in a solar-powered mudbrick cabin on her remote mountain wildlife refuge in the NSW Upper Hunter Valley, the heart of her first two books, The Woman on the Mountain (Exisle 2007) and Mountain Tails (Exisle 2009).

Mother of two, grandmother of five, concern for their future drives Sharyn to use her very personal nonfiction style to reach beyond the converted. In The Woman on the Mountain, sustainability and global warming concerns mix with memoir, nature writing, and survival adventures with chainsaws or snakes. Threatened species is the theme underlying Mountain Tails, a self-illustrated collection of short pieces for animal lovers.

Her short stories have won many prizes, including The Alan Marshall Award; she writes regularly for The Owner Builder Magazine, and her essays have been published in the Griffith Review and famous reporter.

The very different Rich Land, Wasteland — how coal is killing Australia (Pan Macmillan/Exisle 2012) arose from her empathy with the people and places of the nearby Hunter Valley being devastated from runaway opencut coalmining. The aim of this self-designated ‘commonsense activist’ is to shock Australians into action, with the truth about coal and CSG. People have compared her book to Silent Spring in its passion, its exposure of issues and the possibility it may lead to a change in the way we treat our world.

In late 2014 she moved to a different mountain, closer to family, and with new wildlife to be discovered and chronicled in her blog. Sharyn is currently working on a new book, in the personal style of The Woman on the Mountain, to encompass the vast changes in her life since 2007, not least the heart-wrenching experience of researching and writing Rich Land, Wasteland

Listen to this illuminating 2016 podcast interview by Natasha Milne with Sharyn about her life, her books and her activism:

171 thoughts on “About Sharyn Munro”