Five years after our last bad fire, the eucalypt forest has recovered. On the rough and furrowed trunks of the stringybark trees, bunches of dead stems fan out like whiskers, or bony-fingered hands.

When all their normal mop heads of gum leaves were burnt, these emergency feeder leaves sprouted straight out of the blackened trunks, all the way up to the top and along the branches. The forest became an alien one of upraised claws, presenting an increasingly furry silhouette as the suckers emerge.

It was a transitional landscape, for now the mop heads are back and doing their job. The interim sucker leaves are dead and fallen, and eventually their dry stems will break off too.  The blackened bark will remain so. 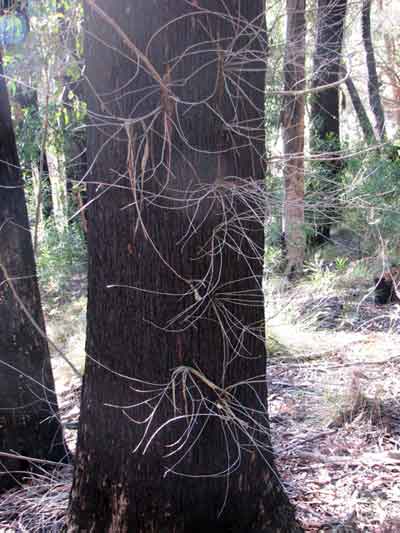 In the more rainforest areas, where the trees do not have this special survival tactic, normality is far slower to return — if ever.

But there are a few protected pockets where isolated offspring of the fallen are growing strongly. In the lee of one dead wattle, as its bark cracks and peels off, a Native Bleeding Heart tree (Omalanthus populifolius) and a Giant Stinging Tree (Dendrocnide excelsa) reach for the sky.

In fact, both have heart-shaped leaves. My mind leapfrogs to connections, connotations — to Richard the Lionheart, Braveheart, to ‘coeur’ — courage, to courage under fire — and after fire? 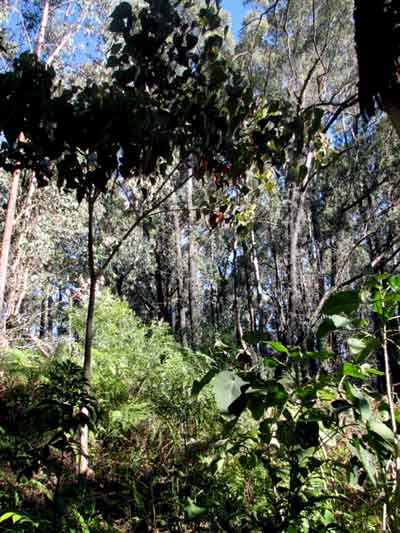