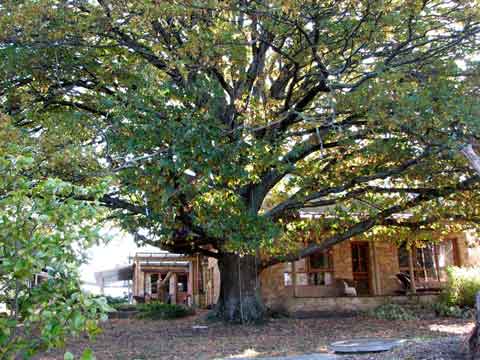 The quaint Rosebank cottage where I stayed ( courtesy of Mary Delahunty and the Victorian Writers’ Centre) was surrounded by introduced trees and garden plants – and did have a bank of roses.

The king of the garden was this giant oak, whose bark was dappled blue with lichen and whose branches reached 15 metres in every direction. A tree to inspire awe, but not for the many immature Crimson Rosellas who daily raided it for acorns. The generous oak dropped shiny acorns, knubby caps, brown leaves and endless twigs for kindling. 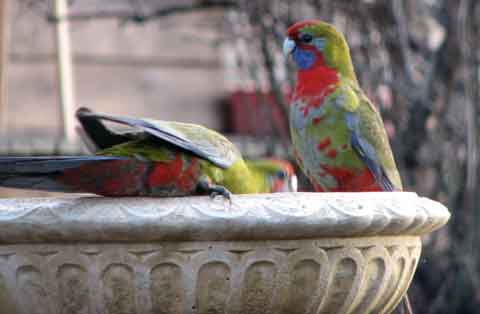 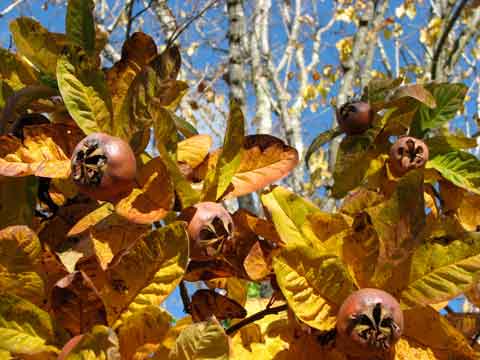 The first was  a tree bearing a strange sci-fi fruit, with its pronged antennae. It turned out to be a Medlar, Mespilus germanica, a fruit popular in mediaeval times, able to be eaten only when soft and half rotten, a process known as ‘bletting’. Then it is like spiced stewed apple — reputedly best accompanied by port. I had no port, but wasn’t keen on the fruit’s texture. However, medlar liqueur sounded tempting. 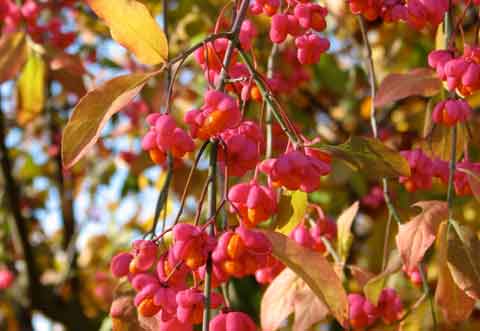 The other plant was a tall and wide shrub with arched and drooping slender branches, bearing only a few autumn leaves, but masses of trailing bunches of small hot pink flowers with orange centres.  Close up, I saw they were more like pods, beginning as quadruple pockmarked globes that split to show the four orange ‘seeds’, which were also rough-skinned like mini cumquats.

When the Woodend nursery identified it for me as Spindle Bush, Euonymus europaeus, I learned that the pink is the fruit and the orange are the seeds, and that they are poisonous. The flowers were described as ‘insignificant’ so I need not regret missing the Spring for them. Common in the Northern Hemisphere, it was named for its hard wood, used for making spindles because it can hold a very fine point.

6 thoughts on “An old garden’s treasures”