After a week on the move, talking about the new book, Mountain Tails, I was glad to be home in the quiet of my natural world, especially in such beautiful Autumn weather.

But I am off again next week, as I am speaking at Tuggerah Library on the central coast of NSW.  This will be at 10.30 a.m. on Wednesday 20th May, and if you live in that area,  it would be great to meet you there.

The first round of talks were in quite varied venues, some more successful than others, but as always it was terrific to get feedback from the audience afterwards.

First talk (below) was at Parramatta Library, back in the area of my birth, the western suburbs of Sydney! It was a good venue and a receptive audience, with Borders bookshop coming along to this one, for the first time. 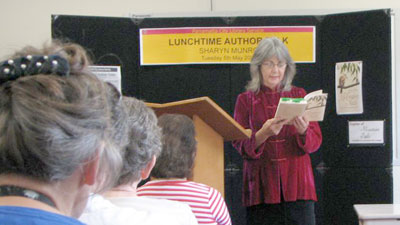 Next was outdoors, at the café in Heritage Gardens near Maitland, where what you might call an intimate group shared afternoon tea and conversation afterwards. Thanks to Helen of Angus & Robertson at Greenhills and Jenny at the café for their support and the idea. 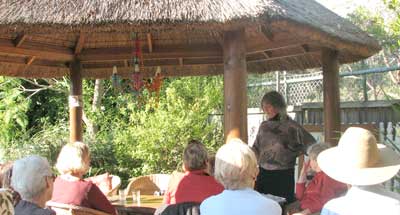 On Friday I spoke at the environmentally designed Wallsend Library, in their spacious multi-purpose room.

Despite the heavy rain outside, it was a good turnout, with several familiar faces and, as always, a pleasure to meet new ones. Sue-Ellen and Catherine from A & R at Kotara  were there to sell the books and give support.

I went there the next day to sign books and was delighted that, while most people bought one or the other, at least four discerning young men bought both my books for their mothers! 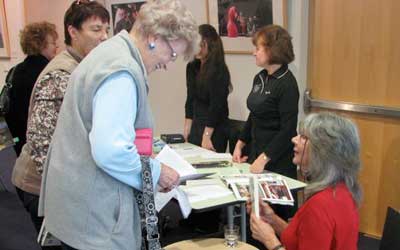 On Mothers’ Day itself I was up early for a great guided walk around the Hunter Wetlands (which they do every second month). A beautiful spot, and the rain held off just long enough. 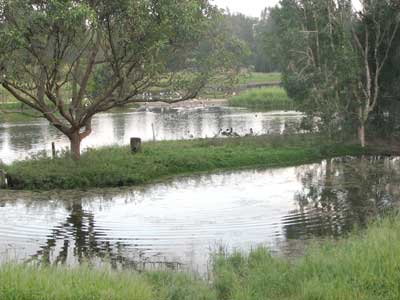 Most striking sight was the endangered desert species, the Freckled Duck (photo by Dael Allison), which were raised from eggs as part of a conservation programme and are now managing to breed on their own. 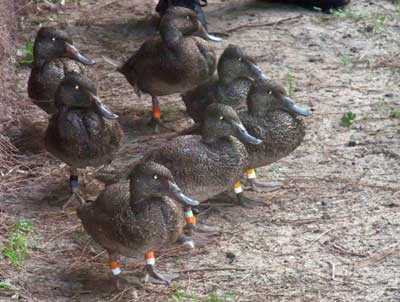 Back at the Wetlands Centre we had breakfast, and then a small group patiently tried to hear me (mike and all) over the many other Mothers’ Day breakfasters in the café’s deck area. Clearly a favourite spot.

A special treat was meeting fellow nature blogger Gaye whose site, Snippets and Sentiments, has provided me with insights many a time.

I’ll certainly go back to the Wetlands on a quieter day and walk around to the many birdwatching spots.

4 thoughts on “Author on the move”