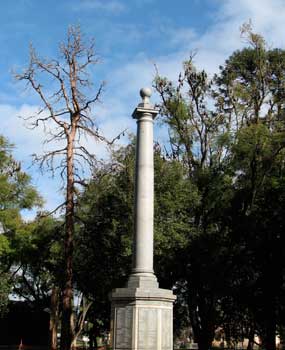 If you became homeless because your house was being demolished, obviously you’d have to find a new home to live in. It’s no different for other animals; we all need shelter, a home, habitat.

However, I suppose we wouldn’t be allowed to choose the amenities block or the bandstand in a public park, let alone bring all our relatives. Similarly, there is much ado when a whole colony of wild creatures takes up residence in civic gardens or parks. Grey-headed Flying-foxes are a common ‘nuisance’ in many town and city parks as land clearing proceeds for development such as mining or housing, and their natural habitat is disturbed or lost. Communities are then divided with debates about how to make them move on before they defoliate all the long-established and cherished trees in a park like this one.

Sydney’s Botanic Gardens has the same problem. Bat droppings, bat screechings and bare trees are not the most inviting ambience for picnickers, walkers — or Anzac Day ceremonies. 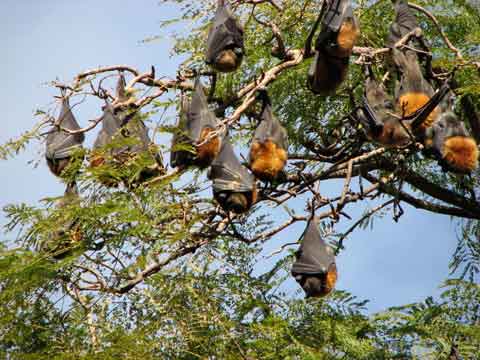 But they are merely the victims, like many of us, of shortsighted ‘planning’.  In fact, these Grey-headed Flying-foxes (sometimes called Grey-headed Fruit-bats) are listed as a vulnerable species.

I took the chance to observe them at a stop at this park. After all, it’s pretty amazing that bats are the only mammals capable of sustained flight.

They spend the day in large camps and head out to feed at night, using sight and smell to find their preferred foods, the blossom and nectar of eucalypts and native fruits and lillipillies.

From introduced trees like jacarandas and firs they were hanging like thousands of leather lanterns with bright furry tops — each upside-down, and by the claws of one forelimb, daredevil style.

They can see quite well in daytime so that must be why they tuck their heads in. Many seem to have trouble getting comfy – they screeched and chattered and wriggled, stretched and flapped their amazing wings, which can exceed a metre in span, before rewrapping themselves in their slinky Batman blankets. 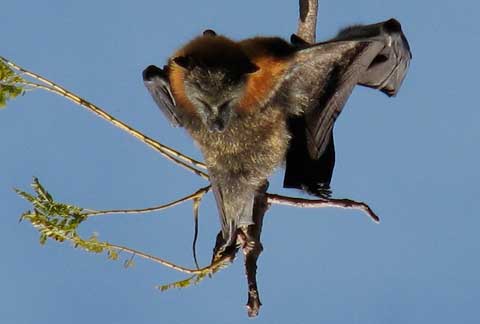 These Flying-foxes, with their foxfire collars, do have faces like foxes, or dogs, as the reversed photo of this restless one shows. They are not at all ugly, and certainly fascinating.

I don’t think I’d want them as close neighbours, but then I’m increasing rather than reducing habitat here, so there’d be room for us all.