In Central Queensland there is a cropping area south of Emerald that’s so rich and reliable it’s called the Golden Triangle. It takes in the towns of Orion, Springsure, Gindie and Rolleston, and supports a population of farming families with an atypically young average age.

You’d have said it had a golden future.

With exceptionally reliable rainfall and deep black soils that grow sorghum, wheat, sunflowers, mung beans, navy beans, chick peas or cotton, any property that goes on the market round there is snapped up at once. Or used to be.

Since Bandanna Energy laid its exploratory coal paws on this region, with their Springsure creek and Arcturus projects, nobody would touch it.

The Golden Triangle group has lobbied hard since 2009 to save their region and their livelihoods. When I visited, I saw how well-cared for and prosperous all the farms were on this flat flood plain; this was bleedingly obvious prime land.

Everyone was holding out hopes for the Queensland Government Strategic Cropping Land (SCL) Policy, then in draft form. If anywhere fitted the bill for protection, surely the Golden Triangle would.

And when the final criteria came out, much of it did. BUT only for new or less advanced projects; easier transitional arrangements would apply to coal projects that had submitted their final EIS terms of reference by 31st May.

Bandanna hadn’t, which gave hope to the farmers, but after some hard private lobbying, on 7th June it was announced that ‘a specific legislated transitional framework would apply to the Springsure Creek Project, green-lighting its potential development as an underground coal project, despite its identification as being some of Queensland’s best cropping land.’

But not to worry, as in published Letters to the Editor (QCL 23/6/11, CQ News 24/6/11 et al), Treasurer Andrew Fraser and former minister Kate Jones state “It is important to note that these transitional conditions were granted to the Springsure Creek project only after Bandanna Energy provided a written assurance that the project would not permanently damage strategic cropping land.”

How can they say this with a straight face?

The group intends to fight even harder against such shortsighted insanity in a world needing food and water security far more than Bandanna needs its coal dollars. They now have their own website, (to be a permanent link from mine) so please visit for more information or to give support. 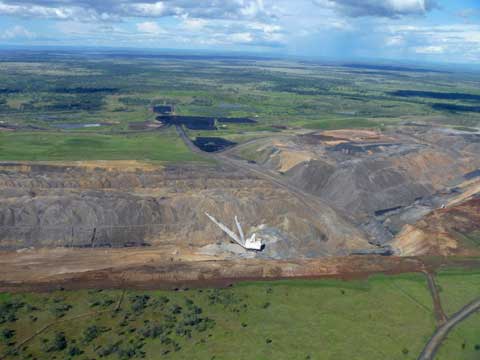 Xstrata’s Rolleston Mine (photo courtesy of the Tysons)

Across the highway, where Avriel and Lindsay Tyson’s ‘Springwood’ is under serious threat from Xstrata’s Rolleston mine (see post ‘When the neighbours get pushy’), another productive farming property has fallen to Xstrata.

On 23 July Avriel emailed that their near neighbour, Meteor Downs, one of the original Springsure district properties — ‘a beautiful old established property’ with lots of history and ‘43,000 acres of good country’ had just been sold by the by AA company to Xstrata – for $21.6 million.

I couldn’t agree more. Where will it end, and who will stop these cashed-up and government-favoured mining companies gobbling up our land, our history and our future? No state government for sure.