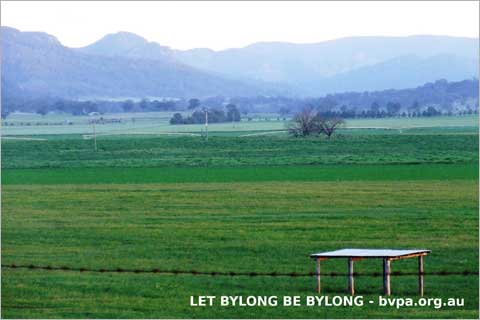 Between the Hunter and Goulburn River regions, there’s a lush green valley called Bylong. Spectacularly edged by the steep escarpments of the Wollemi National Park, it’s home to horses and cattle and a few people. The village itself has a one-stop shop and a population of six, but the greater Bylong area is home to about 60.

Bylong was famous for its annual Mouse Races and for Tarwyn Park, where Peter Andrews OAM developed his revolutionary ‘natural sequence farming’ methods. Now it’s also becoming famous for its strong stand against the coal and coal seam gas companies that threaten its future; they also face a precious metals exploration licence and a geothermal application.

The day I went there, a laden coal train was snaking its way through the Valley to join the northern line to the coal port of Newcastle. It came from the coal-invaded area north of Mudgee, where the villages of Ulan and Wollar are little more than memories now. Bylong has no intentions of joining them in being cleared out by opencut mining or any other form of extractive industry.
This is farmland.

The Bylong Valley Protection Alliance may be small but it’s tech- and publicity-savvy. Their website is bright, informative and always up-to-date, and will be a permanent link from here. I actually didn’t realise I hadn’t already done so; they really deserve to succeed, and have already had quite an effect.

Take a look. Get yourself some of their free bumper or envelope stickers or picturesque ‘pester a pollie’ postcards, like the one at the top of this post. They need a lot of help, because their opponents are seriously heavyweight and cashed-up.

The Korean government-owned Korean Electric Power Company, KEPCO, as the so-Aussie sounding Cockatoo Coal, have two licences to explore 10,300ha here and have now bought historic Bylong Station, a renowned Angus stud, for $18 million. KEPCO is reputed to have bought 30 land titles in the area since they bought the Bylong project for $403 million from Anglo Coal in 2010.

Cascade Coal/White Energy has the nearby Mt Penny exploration lease, controversial at the very least because of the political clouds over the main property involved, Cherrydale Park, being bought by the Obeid family coincidentally not long before the EL was publicly available.

Other large properties like Murrumbo have also been bought up, and the greater Bylong area under threat includes the localities of Murrumbo, Coggan and Growee as well as Bylong itself.

Planet Gas is currently exploration drilling for coal seam gas here, as they are in the Southern Highlands, where Cockatoo Coal is also the threat.

BVPA manage to get good guest speakers and hence draw wider audiences and further publicise their cause. Recently I attended a meeting at Bylong Hall, where journalist Paul Cleary spoke about his new book, Too much luck — the mining boom and Australia’s future.  And it’s not necessarily a rosy one; plenty of good reasons not to mine Bylong.

Outside the hall this old Holden, belonging to Mick Cleary from Grattai, attracted a lot of attention, as it’s meant to, being a mobile protest against injustice of all kinds from what I could read. There were many that applied to Bylong, like this one on the right. 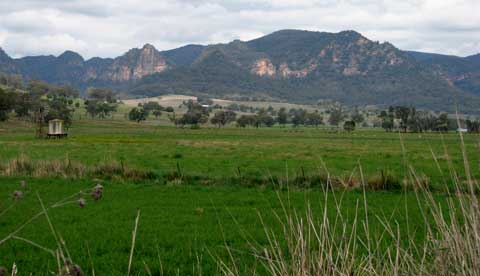 As I headed for the pass out of Bylong towards Rylstone, I could only shake my head —yet again — at the insanity of such a productive region even being considered for mining when we will need more food bowls, not less.

Even if some major agricultural properties are being seduced by the high dollars into selling, as is the right of a landowner, the staunch members of BVPA do not intend to stop fighting to save Bylong from becoming bygone. All power to them.

4 thoughts on “Bylong won’t be bygone”