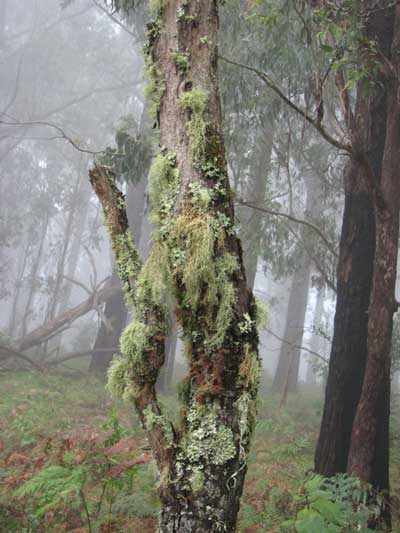 When a tree dies it becomes something else here: a home, for birds if big enough, and for insects, fungi and lichens.

Some seem more appealing to the latter than others, like this fantastically decorated tree.

It stood out amongst the tree trunks of the forest, even in the mist. And this was on north-western side of the trunk, not the south, as I’ve always been told they prefer. 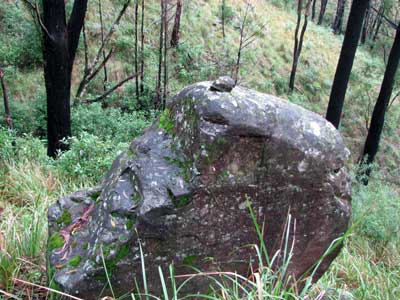 As I walk through my mountain forests I often come across impressive examples of the past power of geological events. I also often see things that I can’t explain.

This mighty rock rests upright, halfway up the sides of one of my spring gullies. It is too imperious to be ‘decorated’ with moss as lesser rocks are, mainly restricting it to its feet.

But how did that small separate rock get up there on its top? And stay there?

It has sat there, like a wren on an elephant’s head, for the thirty years I’ve been here. 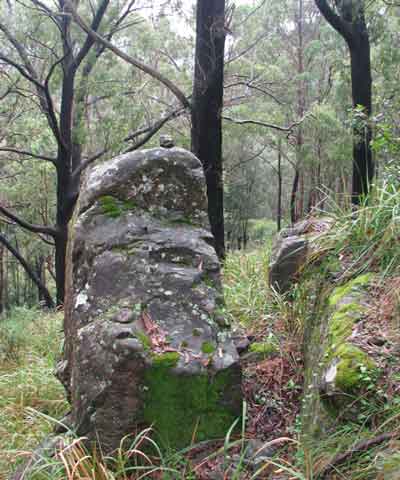 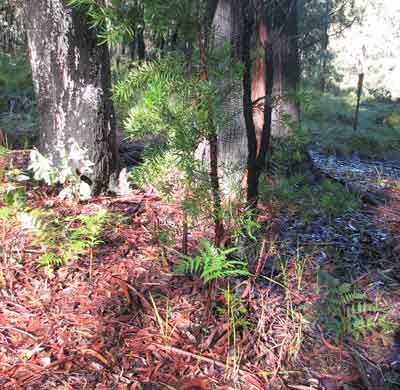 Cabinbound for a week, the day the rain stopped I went for a walk. After so much greyness, the bush seemed overly bright, the colours heightened like pebbles under water.

Everything was still very wet, but there was nothing drab under this fresh new light. Even the soggy leaf litter was bright red, not brown, as were the trunks of saplings and the splits in fire-blackened bark. 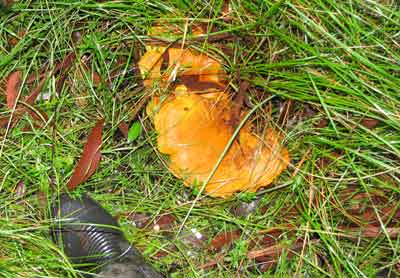 In one small area of tussock grass and bracken, bright orange fungi had sprung up. Thick and bold, they ranged in size from a fifty cent coin to over a foot long – that’s my gumbooted foot next to it.

Searching my new fungi book (thanks Fred!) and a few fungi web sites, it sounds like I have to go back and cut one to be sure. But they could be Saffron Milk Caps — if they ooze milk.

I’m getting as fascinated by fungi as I am by clouds.

I discovered Gaye, a real fungi-lover, coincidentally in the Hunter, at her great blog. 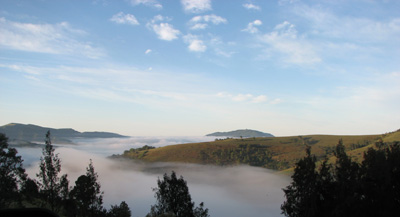 Some early mornings as I leave the mountain I come around a bend and discover a sea of clouds has crept in on the night tide to fill the valleys through which I must drive.

It has been brilliant sunshine at home, but to reach `civilisation’ my Suzi and I must hold our breath, turn on our underwater lights, and descend into the wet blind realm below.

You might protest and say it is merely fog, but I will hold to the image of a cloudland below; far more in keeping with the magic and mystery of this occasional wonder. 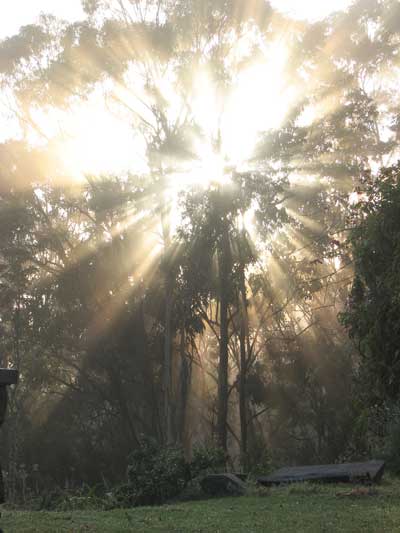 After a week of non-stop rain, I awoke with a start. Something was wrong, different, out-of-the-ordinary. And then it hit me – silence. No rain on my tin roof.

What’s more, I could see beyond the first belt of trees. And soon after, I saw the sun, returning in a most spectacular fashion. Ta-dah!!!

Filtered through mist, yet everything sparkled with gratitude, trees and grass, fences and spiderwebs — and me, looking out my kitchen window at it all. 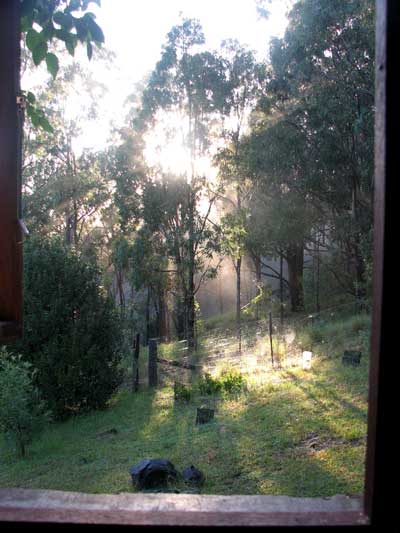 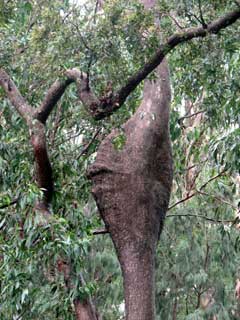 When walking along the forest tracks, I am usually so busy keeping my eyes directed downwards for snakes—and currently for the rare dry strips between the puddles—that I don’t often look up to the treetops.

And besides, to do so I’d have to stop, which is when the army of leeches gets its chance.

‘Up and at’ er!’ comes the order, and within seconds the troops are climbing up my gumboots.

But last week I did stop, and in all the years I’ve driven past this spot, I’ve never noticed this particular angophora tree.

Angophoras twist and turn by nature, but I haven’t seen one pout before!

This summer is atypically steamy for my altitude (around 1000 metres or 3250 feet) and I am seeing strange phenomena that appear to be related to this new climate.

Not the least of which are these surreal deposits, spotted only in one small area up the hill from my cabin.

Several white blobs stood out amongst the greens and greys. Going closer, I saw that clumps of grass stalks were coated – or being coated?– with a sort of slime, translucently white, soft, yet firm enough to hold shape, some still dripping.

‘Ectoplasm’ was my first thought, thinking of the Ghostbusters film. It was immediately dismissed of course.

But had these rather disturbing gobs come from above, been dropped or spat? Or were they oozing up the stalks from the leaf litter below? 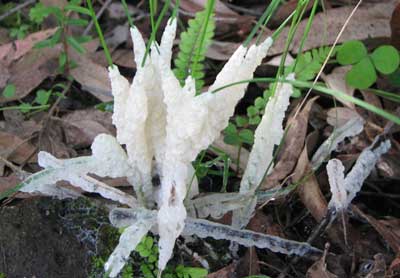 Then I noticed that a nearby stone bore an equally strange blob of speckled grey slime.

Half a metre away, a twig was smothered in what appeared to be a combination one, white on grey. 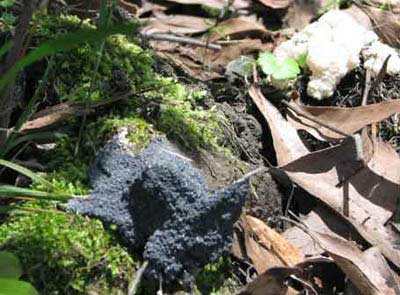 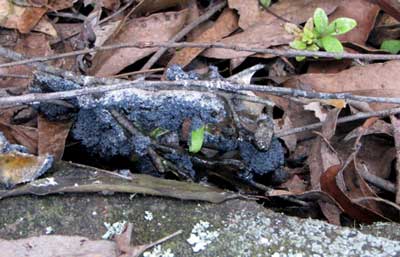 They all had to be some sort of spore.

The grey one was tough and rubbery to the touch, the white felt like powdercoated soft jelly.

Grass stalks collapsed under the latter’s weight as the day heated up, the powder darkened to cream. 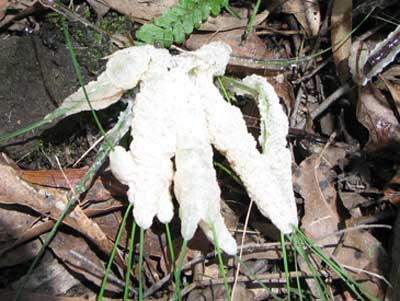 By next day they were all grey. 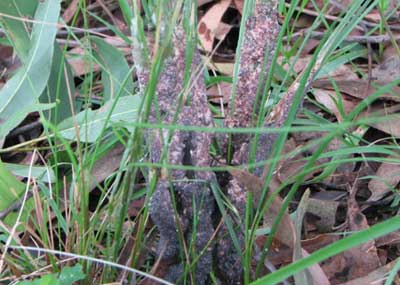 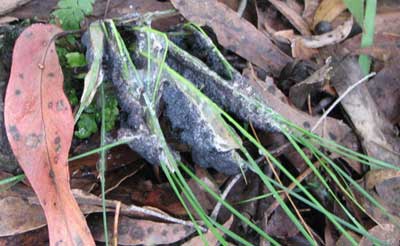 It turns out they are Slime Moulds, from an extraordinary group of organisms called Myxomycetes — neither plant nor animal nor fungi. With more than 1000 species of these ‘intelligent slime’ identified, I am struck that I had not only never seen them (that I am aware of) but had never heard of them.

What a rich world!

Most are brightly coloured and their forms are vastly varied – one of which has led to it being named ‘dog’s vomit’ slime, since that was the explanation usually given to its appearance.

Check out these sites if you want to get to know slime moulds better:

This morning broke several winter records at my place. They won’t impress some of you hardy Tableland and Tassie types, but their rarity here sure impressed me.

At 7am, the sunlight not yet having found us, it was zero degrees on my verandah, which we have had on rare occasions before. What struck me was the whiteness beyond.

I am in the habit of saying ‘Oh, we don’t really get frosts; too high up, you know. Just a little on the mulch now and then.’ I can say that no longer. I don’t know what is normal weather to ‘get’ any more. 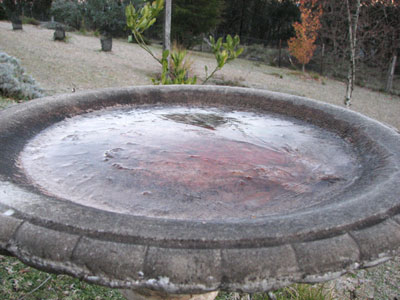 The whole yard was iced: the solar panels, grass, rocks, small shrubs. The birdbath water was frozen solid, the horse tub had an 8mm icy crust. 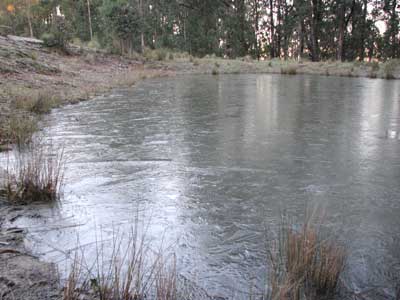 But what caught my eye was a strange texture down on the little dam. In disbelief I approached, still in my slippers, so treading gingerly, with childhood memories of frosty slips and bruised bottoms.

The whole dam was iced over. Not thick enough for skating, but too thick to break with a tap of my foot. 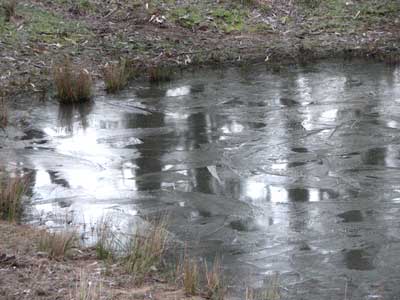 In fact, it was still frozen at noon, when the sun had long been sparkling over its criss-cross crystal patterns.

Today, plants went down with frostbite that have been here for decades.

Today, I thought of a future like this, with ongoing unpredictable extremes, as has already been happening—unseasonable snow, heatwaves, bushfires, floods. How will farmers cope? 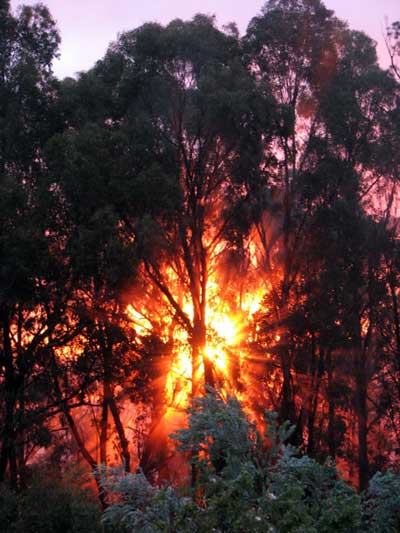 My mountain was enveloped in cloud when I got home late this afternoon. Everything was damp and dripping, shrouded in white mystery.

I’d just unpacked the car and lit the fire when the phone rang. It was an old friend in Victoria. We’d chatted for a while, when, very abruptly, I said, ‘Gotta go. I’ll call you back!’ and hung up.

In a corner of the window in front of my desk, I’d caught a glimpse of a very special roseate colour filtering through the thin cloud mist in the forest. I knew what that meant and how briefly it would exist – and I didn’t want to miss it.

No doubt she thought I was struck down with some violent tummy bug, but in fact it was a rare event that I’ve only seen three times in thirty years.

I describe it in the ‘Wet and wild’ chapter of my book:

‘The cloud might visit me for a morning, a day or a week. …. ‘As the cloud rises, its leave-taking has occasionally coincided with the sun setting through the tree rim on the western edge, creating some breathtaking special effects of refracted fiery light, fanning out like rays of revelation. If the gods had anything to say to us mortals they’d say it then, or if there were a mythmaker about, she’d make one.’ 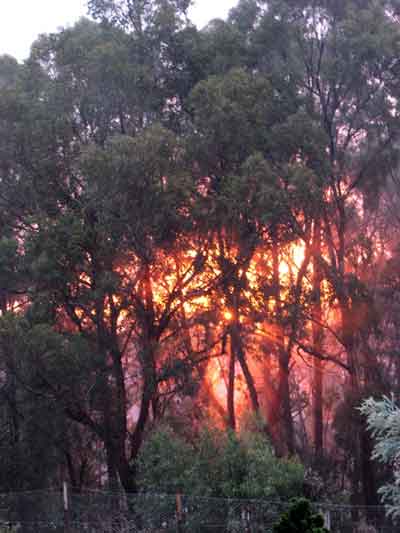