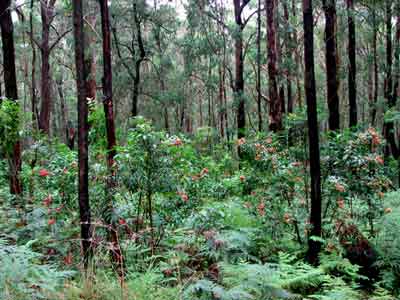 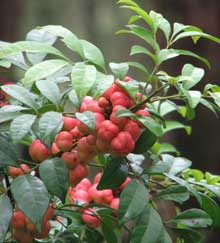 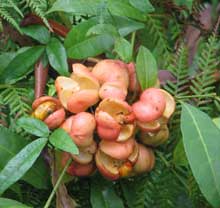 My forest does not have much understorey but in the damper dips and gullies there are always pockets of a small tree—scentless rosewood, Synoum glandulosum.

It has made its presence very evident lately because of its profusion of clusters of pinkish red fruit.

Unfortunately for me they are not as succulent and appetising as they look, being really only fleshy seed capsules.

They remind me of mini-pomegranates—but only visually.

These are now splitting open into three sections to reveal orange-red seeds, which birds seem to like.

A rainforest pioneer, it is one of the few I do not need to raise and plant as, with help from the birds, it has looked after its own future very satisfactorily. 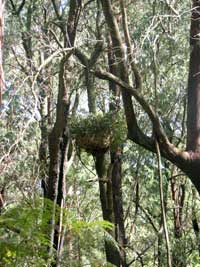 As you might expect, given that I live in forest country, I love trees. 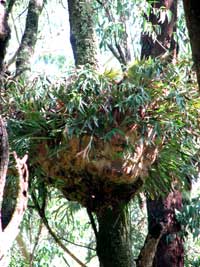 On my place I keep planting more where they haven’t managed to regenerate by themselves after the clearing and burning and grazing of years ago.

Mostly I look at the forest as a wall, I suppose—and thus miss the individuality of the trees.

I ought to look up into my treetops more often, for koalas, not seen here since the 2002 fires.

I keep hoping, as I think I heard one a few months ago.

No koalas yet, but other things live in trees, like this beautifully healthy and quite old elkhorn high up in a casuarina.

When they get this big they can be too heavy for the tree or branch, and hence vulnerable to snapping off in a storm. 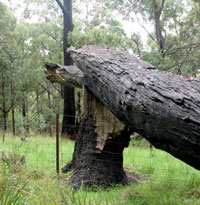 Even when a tree is totally destroyed, its trunk broken off and laid low, taken from skydweller to ground hugger, it takes on new life as host. Like this mighty ancient, which blocked the track for some time until a big enough chainsaw came along.

Where possums and birds may have lived in it before, now termites and beetles and fungi are residents. 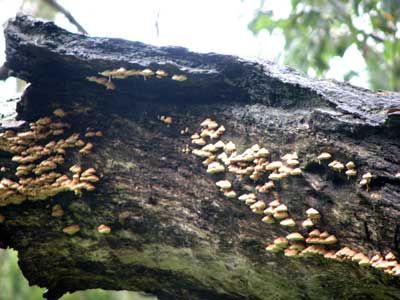 This fungus colony has taken shelter in the horizontal overhang created by what was once vertical.

Nothing is wasted in nature.