About 80 kilometres west of Toowoomba lies some of the richest cropping land in the country — ‘Prime,’ ‘Strategic’ — and any other classification that means the best. This is Cecil Plains.

I’d like you to consider visiting there very soon — as part of a blockade/rally to support the local farmers making a stand against Arrow Energy – and for their land and water.

Good soil and reliable water mean good crops, from cotton to chickpeas.  Cecil Plains has the famous self-cracking black soils over the Condamine Alluvium and the Great Artesian Basin. These are the really essential and sustainable ‘resources’, to be treated with care for future generations.

Arrow Energy wants to drill for CSG here, as part of the short-term resource boom that will end Cecil Plains as a highly productive, long-term food and fibre ‘resource’ region.

The farmers there have been against the ill-informed proposal from the start, to the point of going to court over it. They know what a gas field will do their finely-tuned broad acre precision farming and their careful management of water use for their intensive irrigated cropping.

Arrow has been told of the impacts but presses on regardless and the Government is not stepping in as one would have hoped.

Save Our Darling Downs (SODD) says:

‘After years of discussion with Arrow, the farming community at Cecil Plains remains unconvinced that coexistence is possible. CSG will negatively impact on groundwater and soils and will diminish agricultural productivity in the area. This is unacceptable to our community and should be unacceptable to all Queenslanders.’

And to all Australians.

The project covers 8,600 square kilometers from Wandoan to Goondiwindi and almost 50 per cent of the project area is located on Strategic Cropping Land (SCL). 7,500 wells, thousands of kilometres of pipelines and multiple dams, compressor stations and water treatment facilities are planned.

Why even proceed if SCL would truly stop those activities?

Lock the Gate says that:

‘Arrow has told the government that this Condamine flood plain area at Cecil Plains has a large proportion of the gas across all their tenements and are insistent they will come on. If they can’t get on to this land they will withdraw their investment.’ 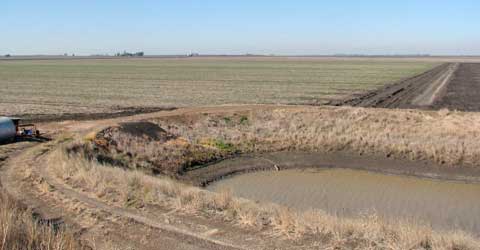 When Federal Environment and Water Minister, Tony Burke, approved the first two big gas projects in October 2010, it was against the advice of his own department’s Water Group, with ‘significant concerns’ about the CSG projects, warning that it could be ‘at least 1000 years’ before water levels recovered.

They spoke of ‘significant impact’ likely, with implications for the Murray-Darling Basin by reducing water in the Condamine Alluvium.

As at Cecil Plains.

After speaking in Cecil Plains last Wedneday night, I stayed with Graham and Wendy Clapham of SODD, and next day Graham showed me around the farm.

I was impressed, not just by the vast size of the operational fields, but the ongoing amount of thought and time and money that has gone into the design of the agriculture practices

The slope of the land, undetectable to my eye, is precisely calculated as to where the water will go. The machinery is designed not to interfere, nor to compact the soil anywhere more than absolutely necessary. In fact, farmers are highly regulated as to what they put on this flood plain, so as not to interfere with the flow.

How can Arrow avoid that? Even one drill hole interferes.

Here they collect any surface water and pump it into storage dams to use — and reticulate to re-use, as well as drawing on their underground water, which is also re-used. They know how precious the Great Artesian Basin is. 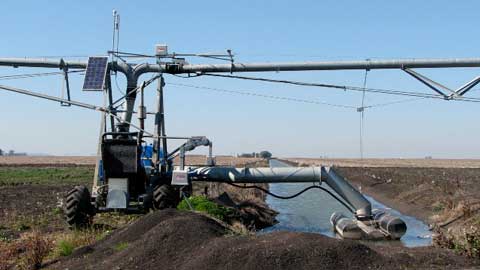 The afternoon before, I drove in through a hazard-reduction smoke haze, but the community opposition and the lack of social licence for Arrow were clear. 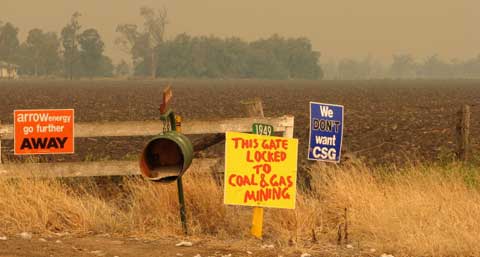 If this project goes ahead, anywhere is ‘fair game’. Arrow is coming back there on 22nd August.

If you want to help force a return to sanity and balance in our destructive and biased mining and petroleum laws,  please keep an eye on the Lock the Gate website for a call hundreds of folk to come in the next few weeks and support the farmers of Cecil Plains — and hence the rest of Australia’s sustainable natural resources.

Cecil Plains may prove to be an historic last stand for sanity.