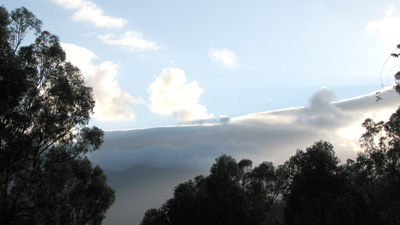 Autumn is noted for its winds here. They’ve been a little late this year, but then everything about the weather has been out of whack.

Because the mountains I face are so high, clouds often get hooked there. The wind then appears to flow over them, sculpts them into an upper mountain range.

But very early the other morning, the wind instead formed the clouds into a mighty dune, super smooth, backlit by the rising sun so it held a silver edge for about a quarter of an hour.

Other small clouds, unreliable bits of fluff, promenaded about and skylarked, ski-ing down the slope while the going was good.

I looked for my local wedge-tailed eagles. I’ll bet they were checking out the wind waves from somewhere out there – ‘Great day for a surf, eh?’

I wished for wings – but instead I grabbed the camera. There’s a lot to be said for getting up early – at least when you live somewhere like this. More clouds to come… 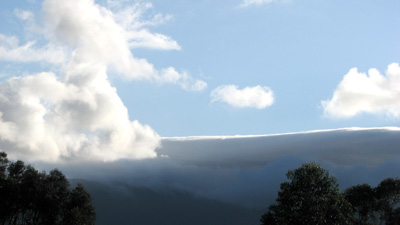