I have always been a cloud-gazer, in awe of their beauty and variety, although mainly at times of sunset or sunrise illumination. But ever since my Tassie friend Fred gave me The Cloudspotter’s Guide by Gavin Pretor-Pinney I have taken even more notice of oddly shaped clouds — without even a tinge of pink.

Being on a mountain,  I am in a good position for cloudspotting as the mountains catch some clouds and create others.

The first photo is one example of clouds shaped in the lee of mountains, orographic clouds  where air is forced up by the obstacle of the mountain range.  I think  these ones could be the Altocumulus lenticularis, mid-level lens shaped clouds. I couldn’t see the other end of them to check if they tapered off similarly there. ‘Elongated lozenges, pancakes…’

It has been suggested that many flying saucer sightings were lenticularis.

In the same sky at the same time, but further west,  this unconnected ‘elongated lozenge’ has been through the wringer and looks more like a Twistie floating about on its lonesome up there. 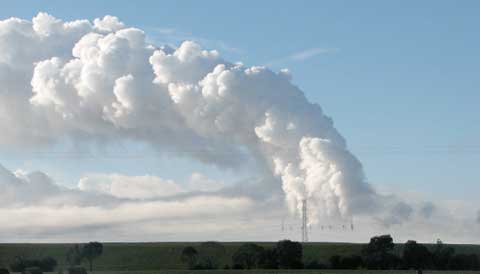 While browsing my cloud book I discovered that there is actually a name for cumulus clouds formed in the hot moist fumes from power station, like these I photographed at Hazelwood in the Latrobe Valley of Victoria. It’s not an official name, just a nickname — ‘fumulus’!