Victoria’s Latrobe Valley is the state’s powerhouse, burning their abundant brown coal for 85% of that state’s electricity. I knew that, but until I went there and stayed to see it in different weather conditions and times of day, I didn’t know it made its own cloudscapes.

The eight little dots creating this amazing, yearning sort of cloud are the tops of the eight stacks at Hazelwood, their oldest power station. Here the output looks harmlessly white and fluffy, which is surprising, given that Hazelwood doesn’t use water cooling towers as the more modern stations do — but then, since Hazelwood was supposed to be dead and buried already, nothing should surprise about it.

That afternoon, Hazelwood seemed to be making the dark cloudscape that hung over the valley. That’s not true either, but it seemed more appropriate than white and fluffy.

Next morning, the Valley was lost in fog, but the many stacks rose above it, erupting like boiling lakes in a sci-fi film. The Valley being also home to huge pine plantations for the paper mill, the stiff foreground outlines of the young pines added to the strangeness of the scene. 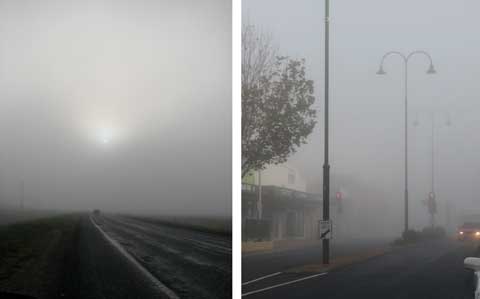 Driving down into the fog was eerie, the sun a cold white dot, the town of Morwell as murky as I imagine 19th century London was.

And yet after my visit I know the Latrobe is nowhere near as polluted as my Hunter Valley, so all this is illusion — my imagination working overtime, my head in the clouds, as usual.