On May Ist, I joined a busload of Hunter farmers and ‘concerned citizens’ like myself and headed down the freeway to Sydney. There we and 4000-5000 others walked from Martin Place to Parliament House in Macquarie Street, chanting all the way, like ‘City and Country — united we stand!’ and bearing colourful signs that spoke of desperation and anger at the threats to their regions.

The ‘Protect our land and water’ rally was organised by NSW Farmers against the Coalition’s draft Strategic Regional Land Use Policy, which breaks pre-election promises and in reality gives no certainty as to protection of either agricultural or environmental values from CSG or COAL or any other resource company’s desires. It was not, as some media portrayed, solely an anti-CSG rally, although there was plenty of angst about that. 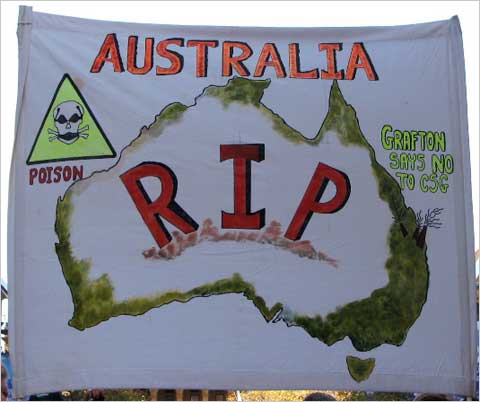 The broken promises centre around exclusion of identified areas of value before exploration licences are issued. Exploration also causes harm (e.g, to aquifers) and investment down that track increases the likelihood of lobbying and success in getting by the proposed protective ‘gateway’. The exploration stage can last years and is extremely stressful for the landowners concerned.

And Cabinet can override the gateway process anyway, as the old 3A did, for projects deemed state significant.

Identifying and mapping areas tp be protected is a good start, but not if is incorrect, so that it only legitimises the absence of extremely important and very obvious features and so offers them not even token protection.

A few glaring omissions just in the Hunter are:

To me, these feel like sacrifices to the coal and CSG projects already in the pipeline there. 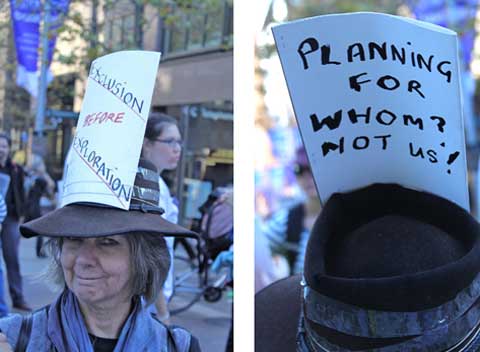 So people are upset, feel betrayed, and fear for the futures not just of their farms but their region. From young to old, they wore their protests, often handmade, on their hearts, in their hands, around their necks, or like me, on their hats! (Denis Wilson snapped the pics of my hat and me with a strange Mad Hatter expression) 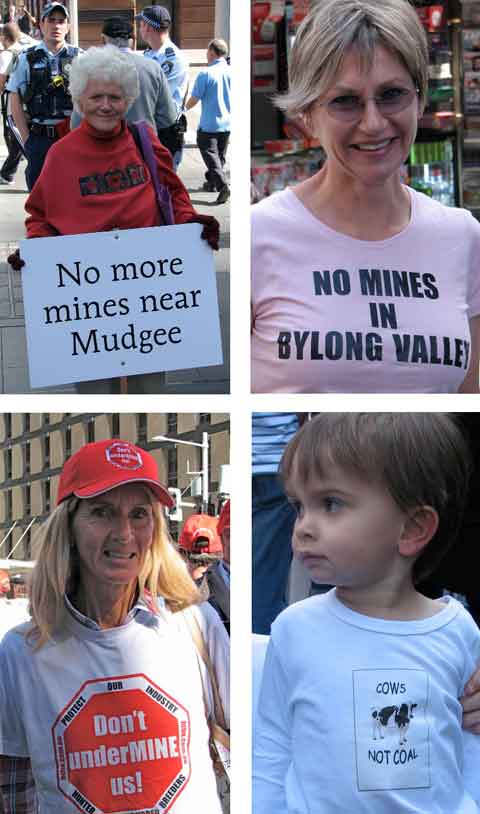 The very cute little boy wearing the ‘Cows not Coal’ T-shirt made by his mum is Lucas Laird,  whose family have been farming at Maules Creek near Narrabri for six generations: see their story on a very moving video. 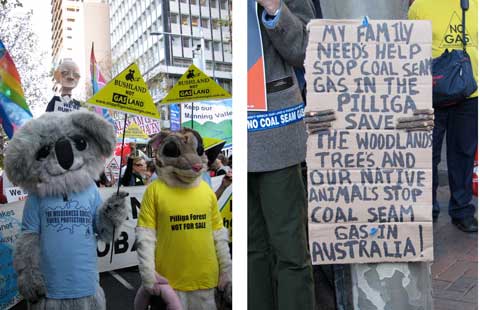 Not only humans were protesting about the out-of-control invasion by resource companies and it is not only farmland at risk.  I loved the tree protester!

The crowd was as diverse as the rally speakers, with the Nature Conservation Council and Lock the Gate representatives standing side-by-side with those from the NSW Farmers Association and the Country Women’s Association. 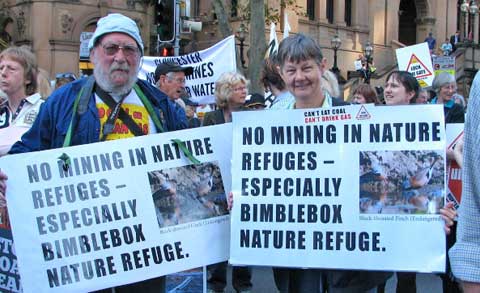 Denis Wilson from Robertson and Maureen Cooper from Beechworth, both friends of Bimblebox, as am I.

The day was inspiring, with a real feeling of solidarity against this mindless rush to dig up one-off fossil resources even if it risks our irreplaceable and so far more valuable long-term natural resources.

6 thoughts on “City and Country: united we stand!”