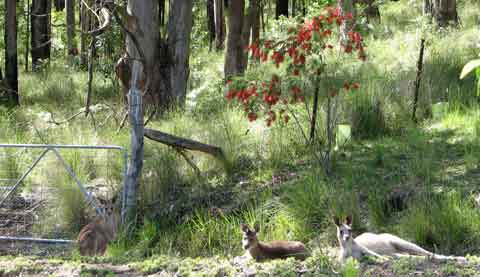 Early morning, sunshine after days of rain, the grass still soggy. The kangaroo family has decided that just inside the forever-open gate, on the hard-packed clay track, is the driest place to rest.

They know my car only moves out of the shed every few weeks — the track’s more for them than for me. 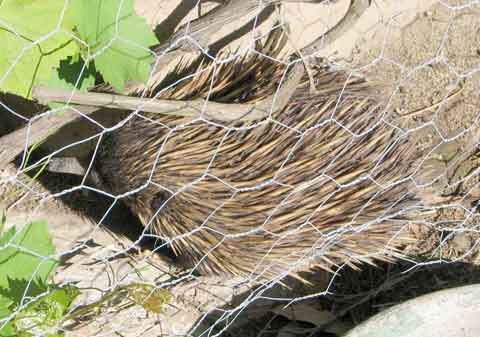 Midday, and one of the echidnas has been poking about on the same track, then working its way down some steps cut into the bank. It had reached the flat area near the cabin and was moseying along the wall towards my steps.

I’d had to net the ornamental grape there, so its shoots had a chance to grow to be my summer shade. Having already seen a joey go under it and panic somewhat, suddenly I saw a potential problem in the combination of spikes and netting, should the echidna go in under the wire.

As it did, but kept going, under the verandah and out. Untangling an echidna might not have been easy. 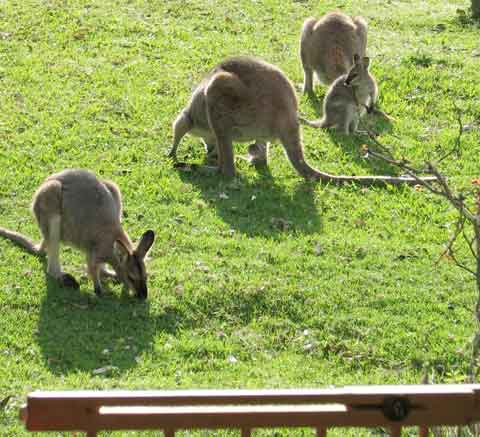 Late afternoon, and over the top of the netted toddler barrier, a wallaby family was mowing the grass near the steps. I’m no longer sure if I’m netted in, or they out. Lucky I have long legs for a shortie and can step over this barrier.

I had to add the netting because one day I surprised a joey munching on the plants on the verandah, having got through the wooden bars. 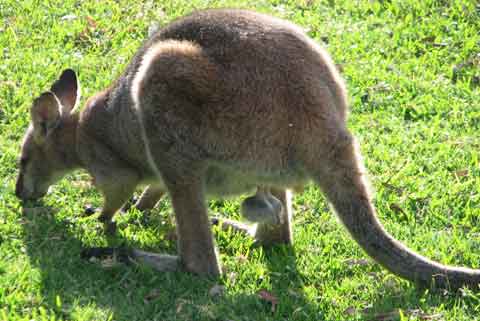 I don’t mean to be voyeuristic but sometimes the colloquial greeting, ‘How’re they hanging?’ takes on new meaning. And to think they leap through the tall tussocks without getting caught up or damaged…

3 thoughts on “Days of their lives”