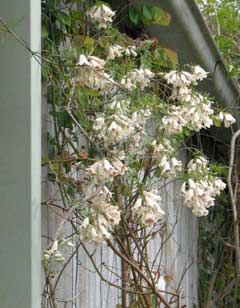 My shed is made from rusty but sound old corrugated iron, with no charm in shape or design to allow me to call it ‘rustic’. So it has to be disguised.

Originally a lovely Madame Carrière climbing rose graced the eastern end, but the possum’s munching has almost made that disappear.

This spring however, for the first time, a native beauty has taken on the role of dressing up the shed.

Since I planted it just around this corner of the shed several years ago, my Pandorea pandorana vine has struggled.

Last year I looped it around the drainpipe to get full sun and it clearly loves this position. 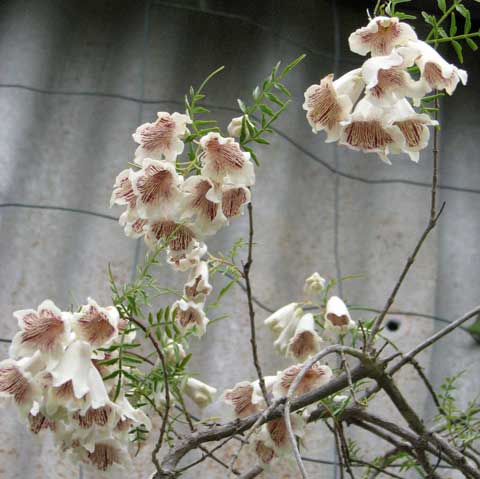 It never has much in the way of foliage and what it has is very fine, but now it has burst into a mass of clustered blossom bells, flaunting their frilly cream skirts and showing off their maroon streaked undersides.

Its common name is Wonga Wonga vine. Without knowing its meaning, I find the sound much less attractive than ‘Pandorea’, so I don’t use it. My Pandorea is a party girl!

6 thoughts on “Dressing up a shed”