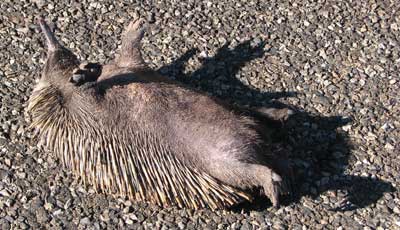 It is somehow worse to see an echidna roadkill than a wallaby. Not only because I see them less often, but because they are so unmistakably not dreaming but dead.

I see wallabies dozing in all sorts of odd poses, but I have never seen a live echidna on its back. The spines are there to protect it from predators; it rolls into a tight spiky ball when threatened.

Yet here it is, the soft underside helplessly exposed, the strong-clawed paws that would have dug it to safety outflung, stiff and useless.

Neither its spikes nor its claws were any defence against the uncaring, unstopping driver of the vehicle that bowled it for six – and out. Echidna-, not manslaughter, hit and run, and yet no one will be punished for this.