I am never a happy flier. I recently endured a five-hour flight to Perth from Sydney, and then a shorter return one of three and a half hours — don’t ask me why they can’t take the short route all the time!

However once airborne, so long as there is no turbulence and no odd noises, I do like to look out the window. I never, ever forget where I am, whereas my fellow passengers seem far more blasé, as if in a train or coach, on the ground, in their natural element, instead of thousands and thousands and thousands of metres ‘up there’, beyond even birdland. 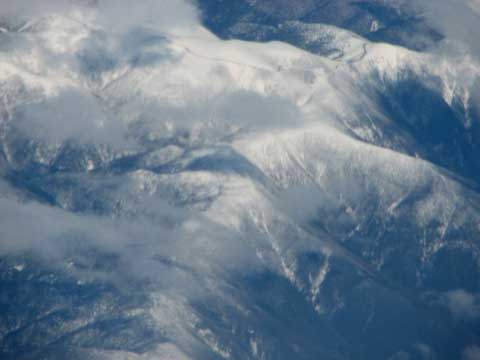 On long flights the plane only flies low enough near the beginning and end for land to be seen as a photo map. I was lucky enough this time for the cloud cover to be thin and fragmented enough to reveal the snow-capped and dusted Snowy Mountains beneath. 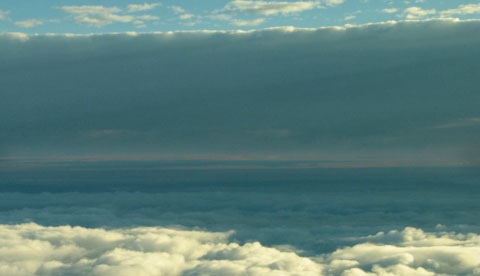 For most of the flight it is cloud land, not earth land, that fascinates. On the early morning return flight we were flying east, so towards the sunrise, and I was struck by the way cloudland had a sunrise streak on its horizon — just like ours, and then a cloud layer above — just like ours.

As this was the first time in a while that I have flown Qantas rather than a very budget airline, I hadn’t experienced airline food for some time, and held an unpleasant memory of a rubbery textured vegetable protein slab like a Wettex  sponge. Having ordered Asian/Indian vegetarian options — and there are several — I was impressed with both the lunch and the breakfast I was served. 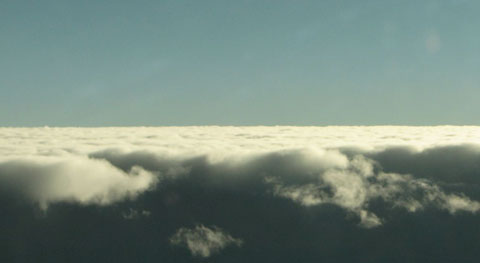 Later, well fed, sun up and back to the surety of which layer was what, I marvelled at the levelness of the upper horizon of this land, giving it such an appearance of solidity.  Why is it so, does anyone know?

7 thoughts on “Flights of fancy”