I have often admired the work of textile artists like Jan Irvine-Nealie, where fine stitching subtly emphasises the shapes and patterns of nature.

However, lacking such patience and delicacy, I have never attempted anything like that.

Until the other day, after a short but violent hail storm and heavy rain, the sun came out for this picture. Not Jan’s tiny stitches, but great long ones, plain as a tailor’s tacking stitches, not necessarily all of even length, but in perfectly straight lines, perfectly spaced. 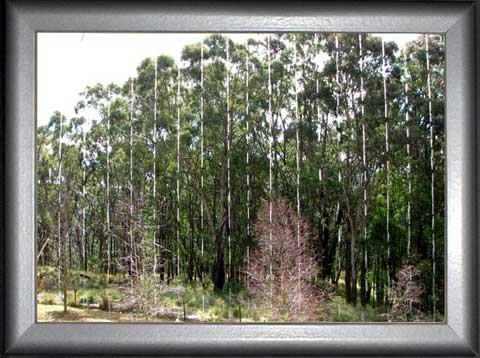 And it’s the latter that gives this away; I couldn’t stitch a straight line to save myself. I had removed the guttering from the verandah roof last summer, because it was sagging and leaking and a fire trap. Now the water simply ran off the corrugated iron roof.

There was so much water still doing that after this storm that it was dripping fast and continuously, in lines rather than round drops, falling from each of the dips of the roof.

It was one of those lightning moments; having taken the camera out looking for hail photos, I was given this instead.