For once I am looking down on cloudland instead of up or across. Only it’s not my cloudland, for I’ve flown to far north Queensland for a four-day holiday, to keep my friend Emily company. The things you do for friends!

Once my nervous system settled down from the take-off, I could kid myself it was all just a passing panoramic picture and I wasn’t really up here in a man-made, man-maintained, flimsy, fallible metal thing, pretending to be a bird.

Then I could marvel at the extraordinary topsy-turvy cloud world below.

There were flat cloud lakes, fields of clouds raked like Japanese pebble gardens, with now and then a tall cloud ridge rising above them. Rarely did the world below intrude, like this dark mountain ridge like a man waving – ‘Hey mountain woman, what you doin’ up there?’ 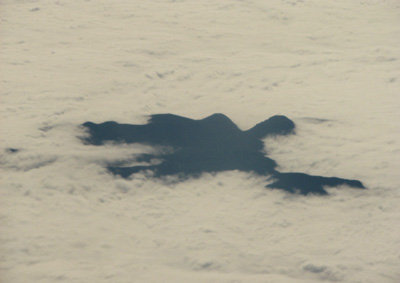 Once we were nearing the Whitsundays, the sea blues changed to aquas and greens as the coral reefs appeared.

It seemed as if every island of any size had developments on it, and the tiny white darts of boat wakes were plentiful. 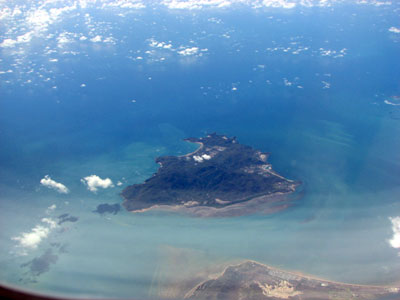 I was spared the Qantas idea of vegetarian food because we forgot to tell them about my inability to eat the beef or chicken options. I could at least have the coffee, but since I didn’t put my glasses on to open the sugar sachet, I flavoured it with black pepper and had to ask for another. Darn nuisances, these vegos!

Landing at Cairns was as scary as landing anywhere else: I hate the feeling of uncontrolled speed after the bump of re-connection.

Cairns felt warm and looked overdeveloped, but we only saw it through the windows of our airconditioned limo as the driver whisked us off along the narrow coast road to Port Douglas. Life can be very hard at times.

1 thought on “From the far side”