Travelling home after two months on the road, for once I chose to be kind to myself, to unwind slowly and not to let time pressures make me rush past all the interesting turnoffs — as usually happened.

Gippsland’s Wilderness Coast is somewhere I definitely want to return to, in another winter, with weeks to spend on its many inlets, points and headlands, beaches and rivers, and in its forests. Extraordinarily diverse, mostly unpopulated, it is full of the wilderness edges I like so much, and protected by National Parks like Cape Conran and Croajingolong, and Marine Parks like Point Hicks and Cape Howe. 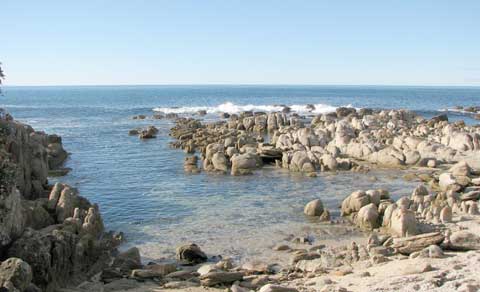 Its pristine Tasman Sea beaches were empty, and faced across Bass Strait to Tasmania, a thought that appealed to me, even though I couldn’t see that now-favourite state. 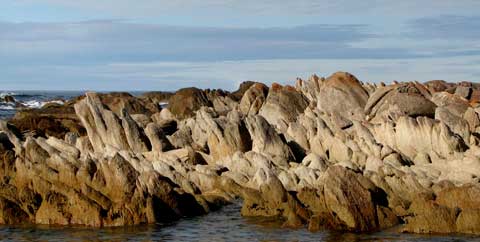 The rocks were different at every stop, but I was particularly taken by these stranded clusters of yearning dolphin-like rocks.

Inland, heading towards Cann River, spectacular and informative Rainforest Walks were signposted and accessed just off the Princes Highway — temptingly too easy to pass by. Suspended bridges crossed the creeks and the timber walkways were still slippery with ice at 11am. 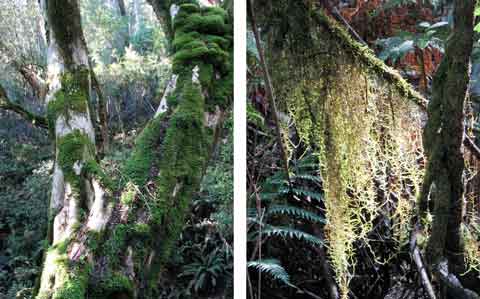 Climbing Genoa Peak was not be missed, my brochure said. Only 1.5 kilometres — but straight up! The climb was mostly through casuarina and angophora forests, with twisted ti-trees higher up.  The paths were soft casuarina needle carpets, with bright correa (Native Fuchsia) blooming their sides. 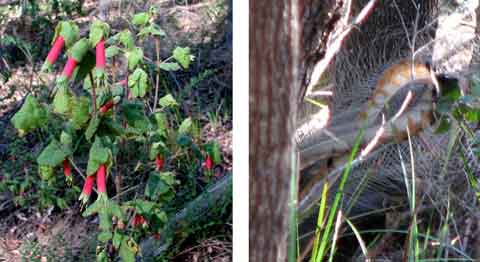 The bush was very still and silent, with nary a bird call or rustle. Suddenly a whole series of calls rang out; it had to be a lyrebird! As it was, but a very quick lyrebird, so I only managed a glimpse of his gorgeous tail as he ran away. 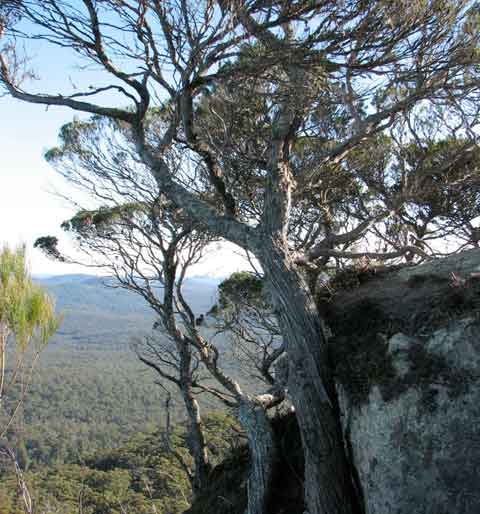 The view from Genoa Peak was impressive. I must confess I didn’t make it to the very top, as the steel ladder to that was so steep that they had a cage around it so one didn’t fall backwards! The previous two steel ladders had been bad enough for height-challenged me.

I did see my destination for that night — Mallacoota Inlet, whence the Genoa River entered the sea, after curving between forest-cushioned shores through the Croajingolong National Park. Maybe I’d do some bushwalking there.

But by the time I was back at the car park at the base of the climb — two hours in total — my calves were screaming:’ Climb no more, you silly old woman! Give us a break.’  Going downhill had been far worse.

4 thoughts on “Gippsland the varied — part 2”