A streak of white down on the little dam alerted me to something different happening there. It was some sort of bird.

I crept closer, staying below the fenceline, as the bird had frozen, clearly on the alert, its round eye bright with tension.

A solitary waterbird, with the typical long legs and neck and pointed beak, its pose held and twinned in the reflections below. 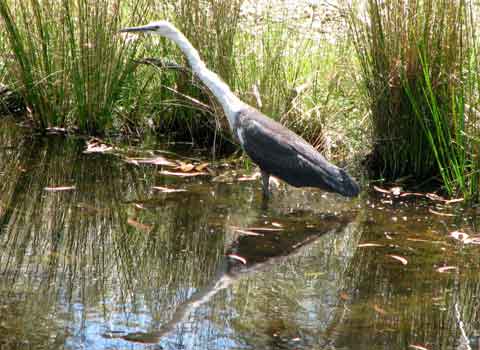 But what was it? More important than identifying it now however, was to get a photograph, in case it flew off before I could see more details.

I edged away and back up to the house for the camera. As I returned towards the fence, the bird did take off but only across the dam, where it stood, totally uncamouflaged, amongst the tussocks for a while.

Meanwhile I took up a post at the gate and froze like a statue myself, to reassure it. 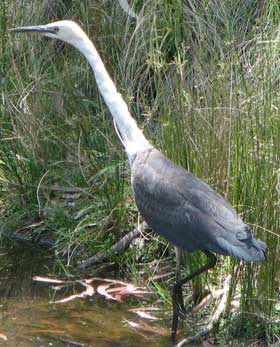 My bird book tells me it was a White-necked Heron.

I wanted to ask it so much: where had it flown from? Was it on a Grand Tour, and where would it meet up with other such herons? Did it always fly solo? Why did its neck look like a twisted white rope? And did it realise how beautiful were the subtle mauves and tealy hues on its ‘grey’ feathers?

It wasn’t a long visit, and I may never see a White-necked Heron here again, but how special it was that it came — and that I saw.