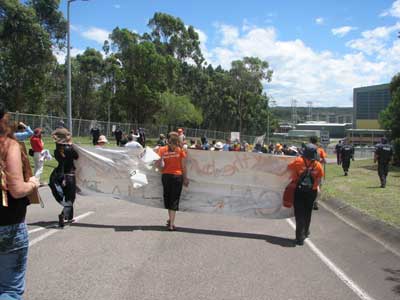 On Saturday 22nd November about 150 people walked in to the aging Eraring Power Station near Newcastle NSW.

Emitting over 20 million tons of C02 each year, it is one of the world’s most polluting, so an appropriate site from which to urge Kevin Rudd and Penny Wong to get serious about acting now to slow our runaway global warming.

And certainly not to give such an emitter a permit to keep doing so!

Police flanked and backed the walkers all the way.

Once we got there, they intensively guarded the final fence, while guard dogs paced behind it and police on horses and trail bikes patrolled the perimeters. We were allowed only three hours for a rally before all had to leave, escorted.

Perhaps they feared strong action, realising that people are getting desperate about the lack of genuine commitment by the Rudd government as time runs out. 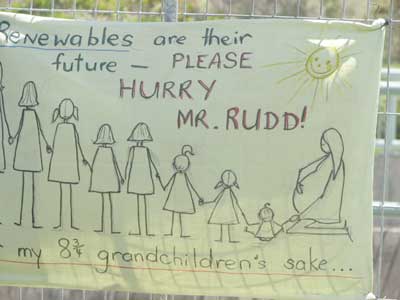 The power station is huge when you’re up this close. It’s daunting, as are the unresponsive policemen between whom we edged to tie to the fence the banners we had carried, plus photos and drawings of things we love, and for whose futures we fear unless carbon emissions are stopped.

Here’s most of mine— less half a grandchild!

In December, the Rudd Government will announce Australia’s medium term emissions reductions targets, and they are widely expected to be weak and ineffective.

It looks unlikely that they will show enough courageous leadership to announce that 2010 will be Australia’s  ‘peak carbon’  year – after that and forever, our greenhouse pollution must come down.

But that is what we need, and what Saturday’s rally called for. 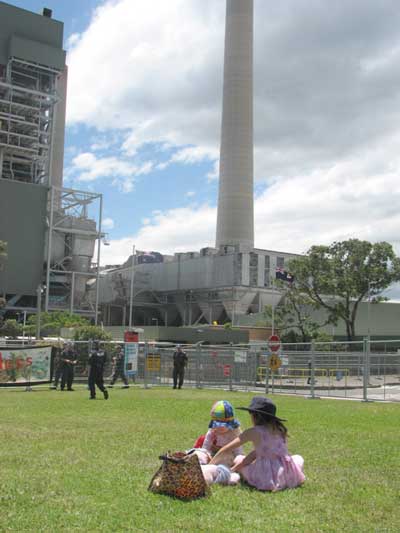 Kids playing against this ominous backdrop made a poignant scene as the adults listened, their hearts heavy and their hopes slim, but still determined to keep pushing the pollies to take responsibility for the future, not just placate for the present.

Greens Senator Christine Milne came from Canberra to address the group and add support to the call for phasing out such toxic coal power and moving to renewables as quickly and as comprehensively as possible. Which is not the same as ‘politically palatable’. 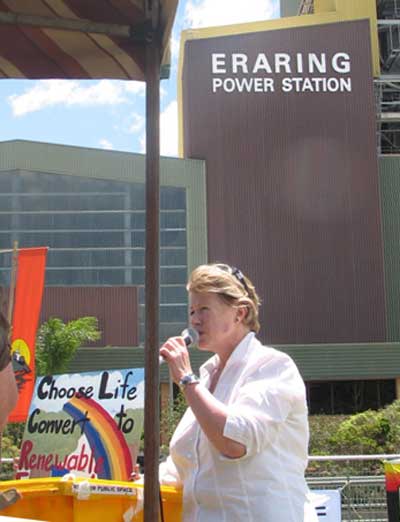 This step-in-to-step-up campaign is especially important as the government will also be going to the international climate change talks in Poznan, Poland, in December.

The Kyoto Protocol runs out in 2012, and the framework for replacing it will be made at the end of 2009 in Copenhagen. It is crucial that governments come out of the Poznan talks with a robust plan for reducing carbon emissions.

Here’s an extract below of what this urgent people pressure push is about, but for more info go to Step it up Australia.

If you can, visit your local Federal Members of Parliament before the end of November, asking for two key things:

If the government does not seize the baton in December, go to those MP’s offices to protest in whatever way you feel comfortable.

Some people will be handing out flyers, some will take their kids in and hand over a petition from them to the Prime Minister, some will be sitting down and refusing to leave.

It is so important that we let them know that their half-measures are not acceptable.

We have so little time left to change our ways.