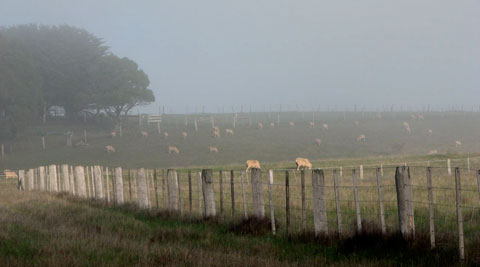 I like the mystery of mist, of fog, of cloud that comes down to join the land. But as a rarity, not a norm.

The Macedon area in Victoria is on a high plain, about 700 metres up, above which rise its ranges. ‘Naturally cool’ is the shire slogan. And it is, on many levels. 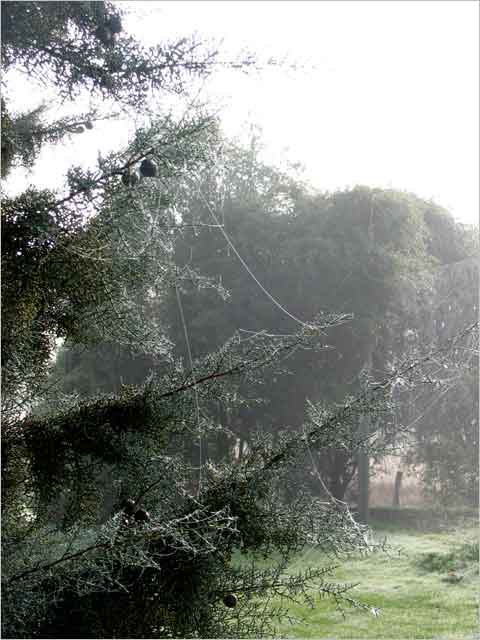 Misty moisty mornings do provide some beautifully lit scenes and special effects, both distant and close. 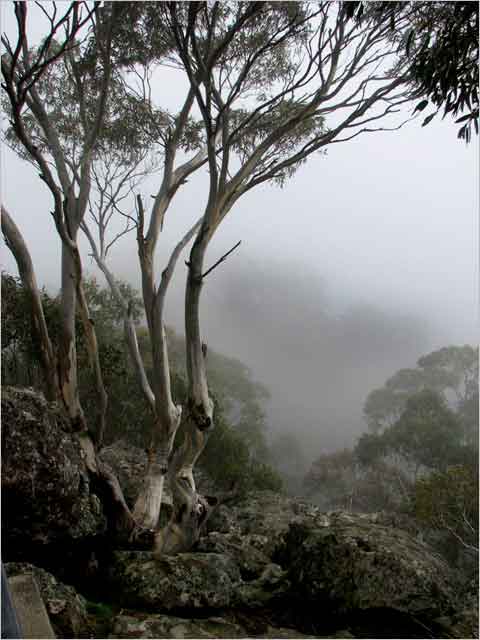 They are not so good for sightseeing. Giving up on a clear day down here in the lowlands, hoping for a change higher up — as I find at home — on two separate days I climbed to the Lookouts on Hanging Rock and the Camel’s Hump (Mount Macdeon). At each the view was of mist.

Apart from climate, the area is pretty cool when it comes to food and culture and shopping too. Every weekend one or other village has a farmers’ market of local produce, and some have local craft markets.

Amongst the latter, I was lucky to make the Gisborne market, where I found a quaint Celtic gypsy tweed ‘hat’ that not only fitted, but didn’t make me look dopey, as beanies do.  Made in Gordon, Victoria, by Seina and Bob Petch of Wild Trout Headwear, it warms my head and my Scottish heart.

As if that wasn’t a treat enough, in the main street itself is the best little shoe shop I have ever been in — that is, if you like quality shoes that are actually designed for human feet, are meant to be worn without pain and are beautiful to boot (sorry, Victoria seems to bring out the punster in me).

Being an impoverished writer, I wouldn’t normally go in to such a shop for fear of being tempted — but it was having a half-price sale on boots.

I’ve been looking for years for flat-soled long plain boots to replace my old faithfuls, now 25 years old, and at which my local bootmaker now just shakes his head. But I didn’t want fake buckles and ruched folds and silly patterns.

God bless Gisborne Footwear! The owner cheerfully (another novelty) pulled out box after box as we refined my ideal.  I found them, I love them, I could afford them – and I am sure I will have them for 25 years too.

I actually sang on the way home that day.