It’s that time of the year when the magpie young are relentlessly pursuing their parents, whining nonstop. They may be as big as the parents, but you can pick the young by their mottled brown and grey colouring; the adults’ crisply dashing colours are not actually just black and white if you look closely.

Other giveaways are the oft-open beak and the gimme-gimme whinge that comes out of it. 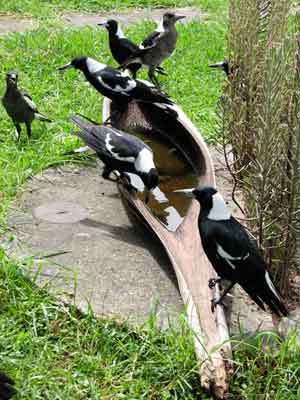 My more northerly friend Christa has lots of magpies in her riverside garden, but she also has a creature or two I don’t.

She sent this photo with the tale ‘The water dragon in my garden is chasing magpies who dare to take a bath in one of the large palmbowls. Loud magpie protests don’t stop him (her?) from charging again — until maggie takes to the air. ‘ 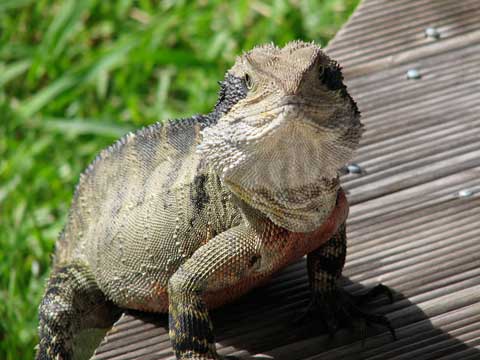 And this is her reply, the tale of her first encounter with a water dragon:

‘I had never seen it before. There it was at the corner of my garden where there were quite a lot of ripe coco palm fruits on the ground. The purple swamp hens like them. So do the dragons. Two hens were busily pecking fruit. This large and colourful one (I have been told the colouring has to do with the mating season — not sure if it’s true) charged at the two hens.

‘They fled down the river bank. I had just come out with the camera in hand to take photos of the hens. The dragon saw me and came at me at full speed. I have no idea whether he thought he could chase me away too or saw me as a source of food. Anyway, I got a bit frightened when it jumped up on the verandah, but managed to take this photo.’

And if dragons and magpies can’t live happily together in reality, Christa, being a bit of a whizz with Photoshop as well as a camera, has created a fantasy union — the Dragonpie!