Recently I spoke at Mudgee Library for the first time. Somehow I missed it for my first book, but It will definitely be on my list for any future ones. This Mid-western Council library is situated in a charming old shopfront building in the heart of Mudgee, which is itself full of lovely heritage buildings.

It is well supported by the Friends of the Library who organised the supper after my talk, patronised by the local booklovers who came to hear me, and most admirably run by Eilagh Rurenga (below). 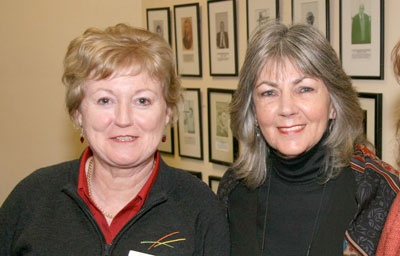 Eilagh gave me a most thoughtful and original introduction, and had thought of everything for the evening — including alerting me to possible loud thuds from books landing in the after-hours chute box behind my lectern. 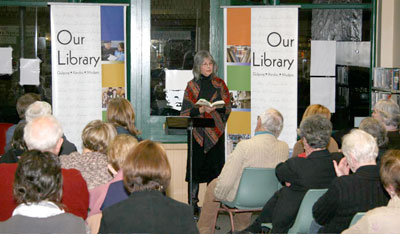 I took the opportunity to warn Mudgee folk of the spreading coal frenzy just to the north of them, not wanting this picturesque district to go the way of the Hunter — but I fear they can’t imagine the devastating effects of so many current mine approvals, let alone proposals and sneaky land buyups in advance of more.

Mudgee has everything going for it, but they will lose it unless the community sees that the threat from unbridled coalmining is not just an issue for greenies: it’s a matter of local survival. Coal is not the smart way to create jobs — just the dirty way.

Photographer Brett Maguire took the pictures on the night; these are just a few. I was impressed with how few double chins he caught — thanks, Brett. He’s obviously a man who knows what women of a certain age want. 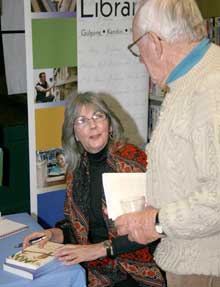 Brett and his wife Aimee are newcomers to Mudgee, seeking a quieter lifestyle, which  Mudgee still offers, along with a wealth of cultural, commercial and culinary facilities, not to mention being surrounded by wineries.

Julie from local bookshop Books in Mudgee provided books for sale and, as always, I had some great chats with people like Norman Leonard (left) while I signed their copies.