Last week a swag of mining bigwigs paid a few thousand dollars each to gather at the Parklands Resort just outside Mudgee and no doubt discuss the many opportunities for them in the region.

Unfortunately, with the three coal mines already operating just 50kms north of their town – Ulan, Moolarben and Wilpinjong– and their planned expansions, plus the proposals for Cobbora, Bylong and Running Stream, a lot of locals take a rather different view on their prospects under coal — or silver, as at Lue, or CSG or whatever else can make a few billion for big business.

David Clarke from NSW Farmers is pictured above, speaking from the posh truck stage, watched by M.C. Nell Schofield from Running Stream. (Photo from the Mudgee Mining the wHole story website)

Buses lent and driven by Susan Symons and Grayson Tuck-Lee, themselves severely impacted by the Moolarben mine, took about 100 people to a rally opposite the Resort. 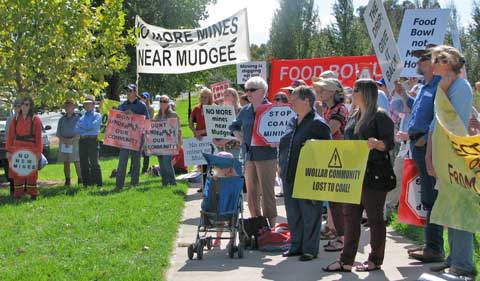 Speakers summed up the issues from the back of a truck; passing traffic stared, some tooted support; only one driver yelled abuse. 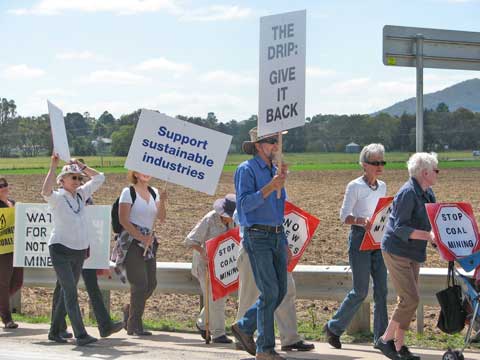 Then we walked back to town, carrying a plethora of signs, and chanting ‘No more mines near Mudgee!’ 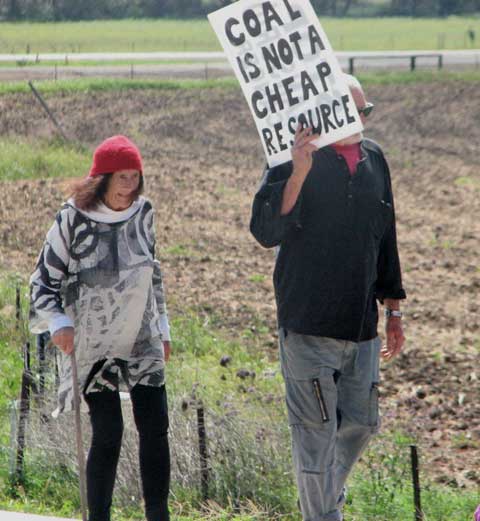 It was a scattered trail, as some walkers were aged and some frail, a few walking with the aid of a stick — and with difficulty.

Several pushed toddlers in strollers — the generation who will bear the brunt of what is happening here long after the bigwigs have nicked off with the loot.

Some folk were from the almost extinct villages of Ulan and Wollar — cleared out by coal. Others had come from beyond the shire to lend support; those of us from the coal-trashed Hunter could only hope Mudgee does not go the same way.

Afternoon sessions at Lawson Park were illuminating, as a wide range of visiting and local speakers offered information and experiences and discussed various impacts, many already evident, from health to housing, business, wineries, tourism and farming. The day ended with a full-house dinner talk by me, called ‘Clearing out the country’, the title of the chapter about this area in my new book.

It was appropriate that I spoke there first about the book, Rich Land, Waste Land — how coal is killing Australia as the ‘Rich Land’ is embodied on the cover by my photo of the Andrews family at their Tarwyn Park property at Bylong — a spectacularly inappropriate place to mine!

Next day a full busload went on the Magical Misery tour to see current and possible future impacted areas. I’d had to leave, but then I’ve done my own misery tour for the book.

I feel that this Mudgee event foreshadows many such combinings of forces, as people power is increasingly seen as the only tool left to us, because, as I said in my talk, ‘reason and right and forward thinking have been taken out of the process’ by government.