As soon as the rain stopped I got stuck into digging while the clayey soil was diggable. I am finally excavating for a bathroom!
With ABC Radio playing and my eyes watching what I was doing, it was mere chance that I looked behind me.

About a metre away was the black snake, minding its own business and poking about near the earth I had just dumped. Damn! I could not continue work with it so close.

I ceded the territory and went around the house to the verandah to watch where it went. Having satisfied its curiosity, the snake continued up the slope to the gate.

It occurred to me then that the wild creatures have stuck to this same path, once a wallaby track, and sensibly diagonally across the slope, despite my erecting a fence straight through it. 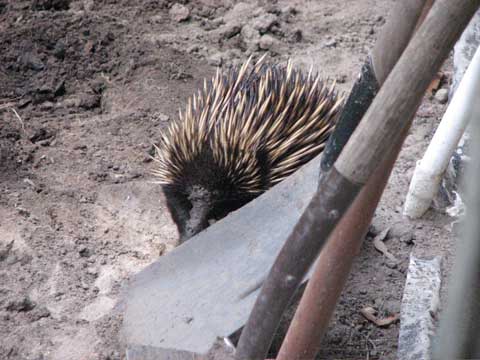 For that day I had also seen the echidna following the track, now barely distinguishable to me — but clearly not so to them. Like the snake, it detoured to investigate what my digging was turning up.