Having assumed that the Diamond Python relocated from my verandah to the national park would stay there, I received a nasty surprise late yesterday afternoon. 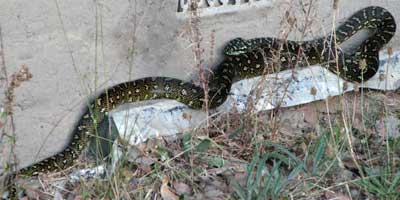 What looked like the same python –– no distinguishing features! but the same size – was making its way along the footings. Had it travelled several kilometres to its old home, i.e., mine? 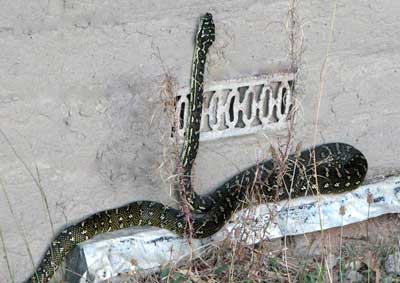 As it appeared to consider heading straight up the mud wall, I went and closed the windows. I was glad I’d got round to plugging a few holes in the last week. But had I found them all?! 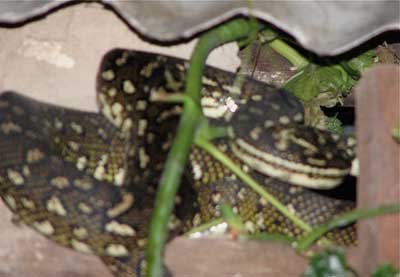 As dusk fell, with shudders at the memories of last time, I hurried to have my shower (which is  on the verandah) before it decided to resume its occupancy there.

I didn’t see where the homing python went, but later that night my torchlight found it back in its old spot on top of the mud wall corner, just under the tin.

Next morning it was still there, but more restless. After breakfast it was gone, and despite peering hard into the grape vine along the western wall, I couldn’t see it.

Every time I went outside I searched the verandah for telltale splashes of pattern or bulges of shape. And I realised how complacent I’d grown since it was evicted last time: such as flipping over the wind-blown rubber bathmat by hand. It’d be back to the broom from now on.

It was only as I went to ascend the steps to the verandah that I glanced up and there it was: right above the top step, seemingly comfortable, slung between the wire netting and the tin, and only marginally supported by the rafter. 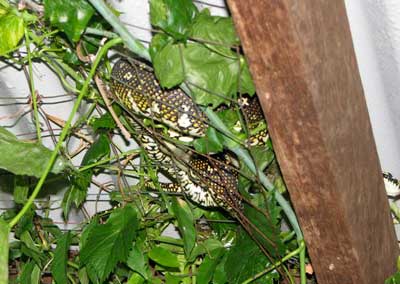 I envisaged its questing head dangling down as I walked beneath.

I’m back to high python alert outside and inside, in case it finds a place to sneak into the ceiling.

But if it’s so keen to share with me, I think I’ll have to get used to it. Perhaps it will help if I name my python tenant, but that’s hard when I don’t know its gender. Daphne or Desmond?

3 thoughts on “Return of the python”