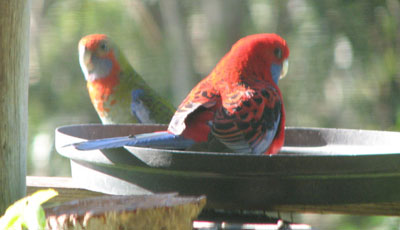 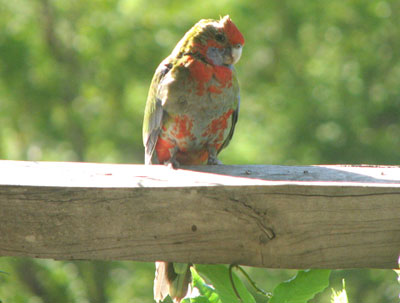 Just before I went away for a few days this week, I photographed the swallow babies again.

Three were clearly visible, two in the nest and one on the rafter. I suspect the latter was the the same baby who has been the boldest ever since birth. I looked from all angles but could not see the fourth. 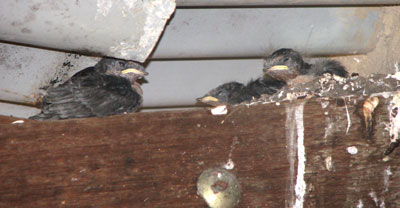 And then I did, but not by looking up. Down on the verandah, amidst all the droppings, was a bedraggled smudge of feathers: the fourth nestling. It must have fallen.

I consoled myself – and the parents – with the thought that three out of four wasn’t bad, given all the problems of feeding and squeezing into the nest and avoiding predators. 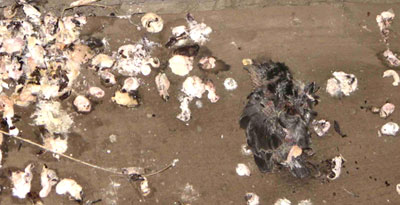 But now I am back, only three days later, and in the nest I can see two babies, fluffed up against the breeze, looking very fat and healthy, much more developed and alert. I can only see one parent bird at a time, looking much thinner and stressed, as you’d expect, keeping up with such growth.

Yet I see no sign of the third baby — up or down. No little body on the verandah. Have they smothered it in the nest?

All the next day I have waited for a parent to return, to perch on the fairy lights as usual. Perhaps I missed a quick visit, but all has been quiet out there too — no twittering.

And then I can see only one bird up there, and I guess that the parents have been staying away to make them leave the nest.

This is not how I have seen them do it before, when they perched in view and called, encouraging their young to join them. I could then watch the learning-to-fly sessions.

This time it feels like abandonment; I can’t see a swallow, young or old, anywhere aerially about.

An hour later, and I have missed the moment when the last nestling set off on its own.

This is truly ’empty nest’ syndrome. But only until next year. 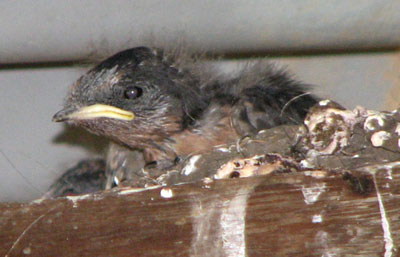 A few days ago I noticed that the swallow babies had their eyes open, but as they were still mostly hunkering down inside the nest, I could see little of their bodies. 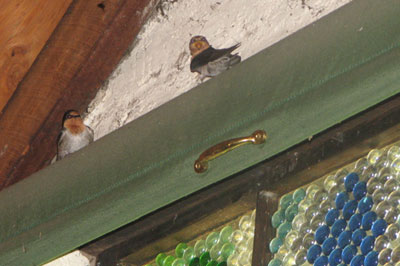 On the warm days, with my door wide open, the parents were coming inside more often, no doubt as the demand for food increased. There’d be flies and plenty of spiders, if they fancied them, amongst the cobwebs on my rafters. 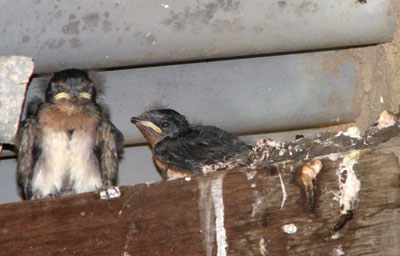 Then just today, I spotted one baby outside the nest, sitting on the rafter. Understandably, as the nest is starting to look quite befouled, and given the size of this bold baby, must also be quite crowded.

As the others stretched and perched higher, I could see that the adult feathers were begining to show though the baby fluff, and the tip of the beak is now dark! 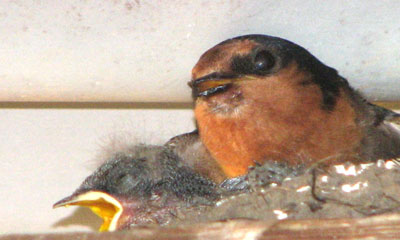 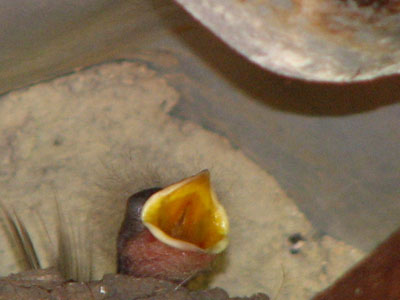 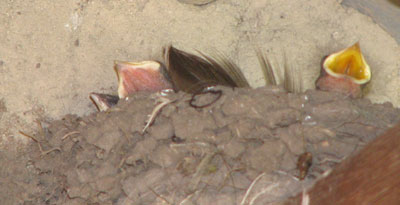 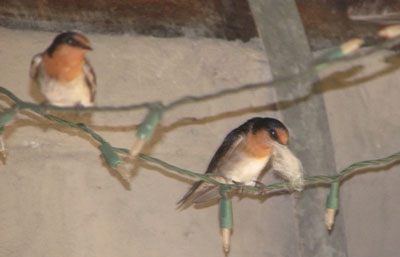 A pair of Welcome Swallows has turned up for the annual nesting adventure.  They took a few weeks to decide just where, but as usual, they have chosen poorly. 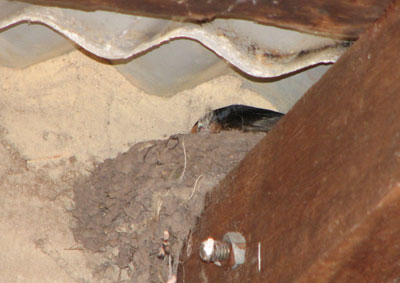 They’ve begun their mud dab nest on a rafter of my unlined verandah roof, up against the mud wall. It’s good adhesion, but bad positioning.

Far too close to the tin so it will be far too hot for the baby birds as the weather heats up. I’ll have to get up on the roof and weigh down a piece of plywood or something to give them some extra insulation. 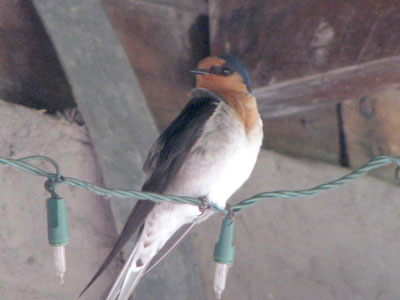 The extensive verandah strings of fairy lights are providing them with circus type swings, from which they can more widely spatter their white and black droppings.

I do like these handsome little swallows and I look forward to the nestling stage, now that they didn’t choose to nest outside my bedroom window! 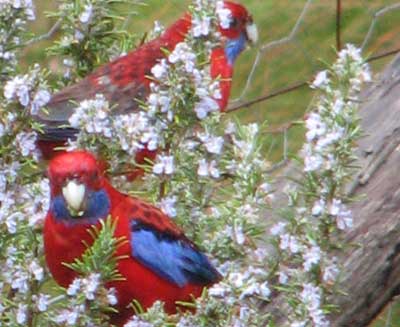 Woody narrow-leaved Mediterranean shrubs like rosemary are happy in drier and poorer soils, and grow well from cuttings.

Hence I have poked rosemary bushes into the least fertile places in my yard, such as the clay patches by the track.

And just look how they repay me! Pale blue blossoms absolutely festoon the branches in winter. 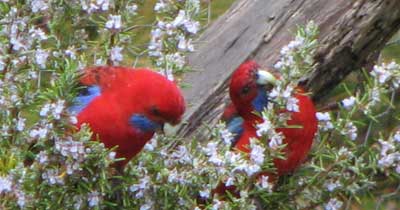 Bees love them. So, it seems, do the crimson rosellas, at least on this occasion.

I’m not sure what they would have been eating on the rosemary, but their richly-coloured plumage was such a contrast that they made the bushes appear snowy.

They have’t been back since, but then so many of the special sights here are only fleetingly fabulous. 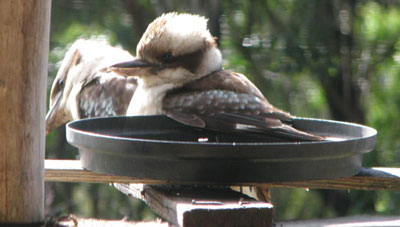 Not that they were interested in birdseed, but it made a good vantage point for wormwatching.

They weren’t into team diving, however, and they wouldn’t have shared the worm.

Probably siblings from one of the large kookaburra family tribes on my place, they’d be used to helping feed younger brothers or sisters, so maybe they were hunting to take back to the nest. 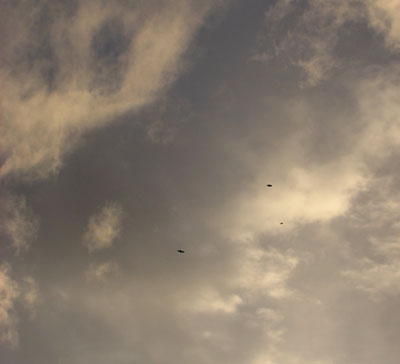 No, that’s not fly dirt on the picture — it’s the pair of wedge-tailed eagles who lord it over the upper skies here, and have done for the 30 years I’ve been here. They usually have a third in tow, their young one.

They cruise so high up it’s amazing they can spot anything down here on the ground. Their eyesight is equal to ours when using binoculars with 20 times magnification powers.

No other bird can make it up there, although the magpies will chase eagles a long way above the treeline. 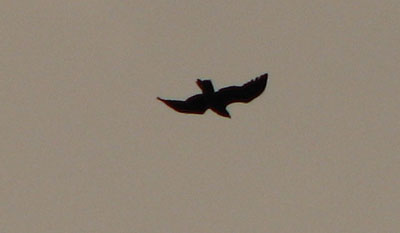 I zoom in to check, but oh yes, it’s the wedgies. 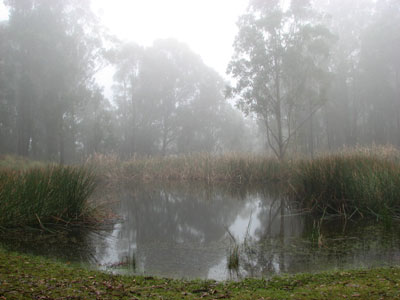 Walking inside a cloud makes for mystery, not clarity. At 3000 feet up, I get a lot of cloud visits.

My large double dam, slowly being throttled by reeds, was floating in the filtered light of thin cloud as I walked around it.

Through the reeds I spotted a pair of wood ducks. I crept towards them, but as usual they sensed me coming, and headed off into the mist.

This shy and very elegant native duck is my most common water visitor. 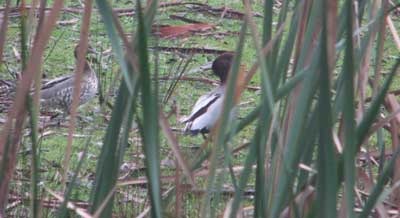 The male has less patterning on his body and a chestnut brown head, and if you look carefully at the peek shot of them amongst the reeds, you can see the black strip of mane at the back of his head – he is sometimes called a Maned Wood Duck.

The female is a softly spotted grey, with white stripes across her brown head, although you can’t see that in these misty pics.

Until they are grown up, the young ones of both sexes look like their mum. 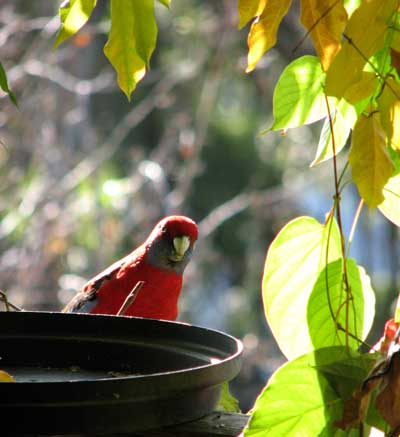 It’s hard to believe that a year has passed since I began this blog, but the leaves were definitely turning and falling in those first photos.

I was reminded of this the other day when I saw a crimson rosella clearly visible amongst the thinning vine cover on the verandah in front of me, where before they’d been peeping out from a densely green and then red leafy curtain.

The querulous poses it was adopting were as clear as its presence: ‘So where’s the tucker??’

It’s easy to see when the predominant native grass in my `lawn’ is seeding, because the yard is taken over by a purposeful band of crimson rosellas.

They proceed en masse up the slope, through thin grass as tall as themselves.

Standing on one leg, each daintily grasps a seedhead stem with the claw of the other, bends it towards their beak and neatly strips it, rather as we’d munch sideways along a cob of corn.

The harvest appears organised and amicable: no crossing of territory, no debate about personal patches, not one squawk of protest.

It is a silent harvest, though highly visible, as the richness of their red and blue plumage turns my plain yard into a moving tapestry. 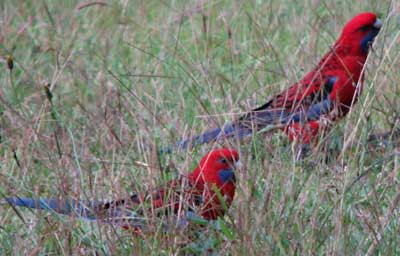