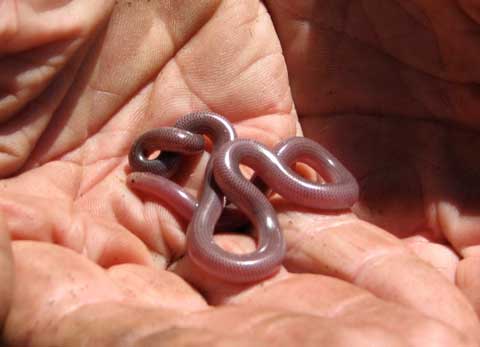 As you may know, snakes have a certain effect on me that I have not yet overcome. However this one, found under a log by a visitor, I can cope with.

In fact I can say I almost find it cute.

It’s a Common Eastern Blind Snake — sometimes called Worm Snakes for obvious reasons. They aren’t actually blind, since that dot gives them ‘nominal eyesight’ according to my book.

They are the only Australian snakes known to feed on insects — like ants and termites.

Not much is known about the 30 or so species thought to exist in Australia, and some scientists apparently place them somewhere in between snakes and lizards.

But here’s the part they do know that appeals to me: ‘They are unable to bite humans and lack venom glands’.