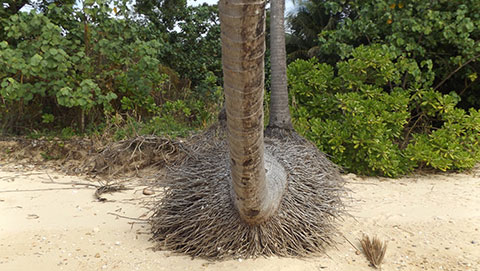 But even here natural survivors struggle on, like this coconut palm.

Years ago I had read Banfield’s Confessions of a Beachcomber about his time there. But Dunk Island is not the romantic and untouched place he described, full of wildlife. 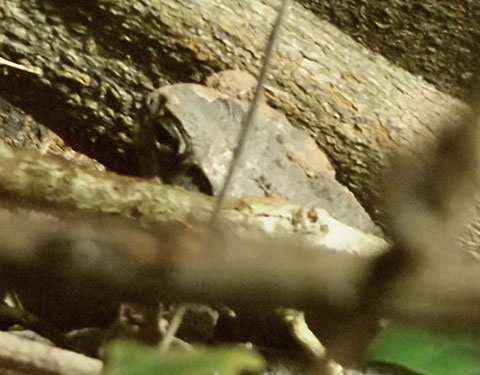 I struggled to see any, and I’m afraid that the one frog briefly spotted on the climb to the top of the mountain may well be a cane toad. It was extremely well camouflaged and doesn’t fit any in my frog book.

There was no flora or fauna information on the Island, even though much of it still a national park, and walking tracks were vague. 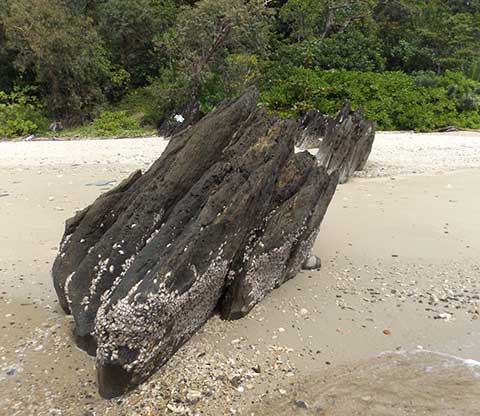 The rocks are spectacularly jagged and slanted, thrusting up in sharp slabs from beneath the gritty sand of finely crushed coral. Shellfish cluster round their high tide bases. 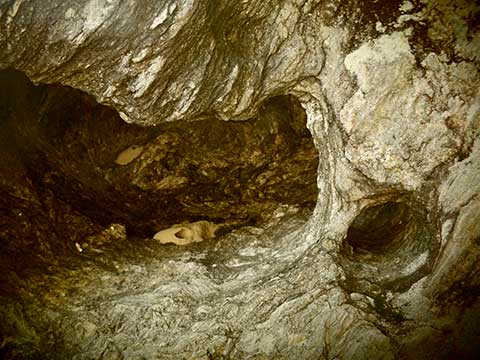 Even well above any tide line, wasps find shelter in their hollows… 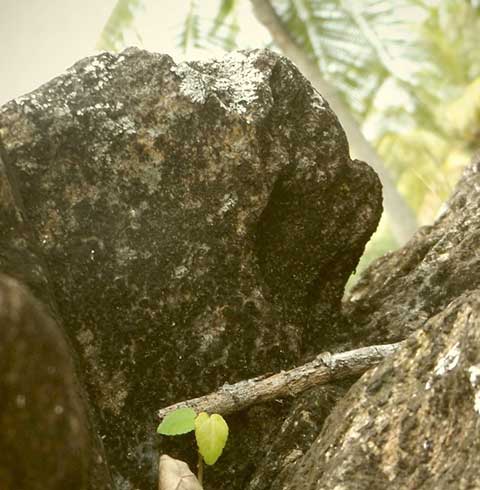 … and tiny tree seedlings root in any crevices where soil or rotting vegetation have lodged.

Beautiful as it is, I found Dunk to be a sad place, damaged by more than Yasi.

The coast is close here, a quick water taxi ride away.

It’s famous for its Cassowaries and crocodiles, but I saw neither. My most interesting northern sighting was of an Orange-footed Scrubfowl. 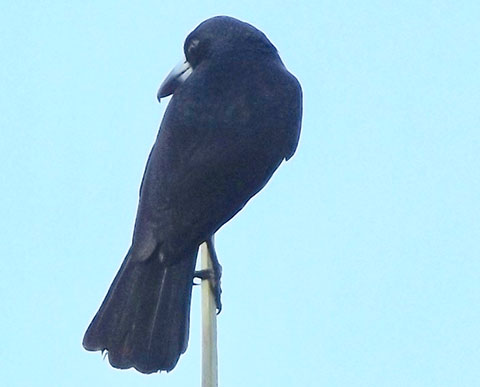 Not exclusive to the north, but not often seen by me, was what I think was a Spangled Drongo. 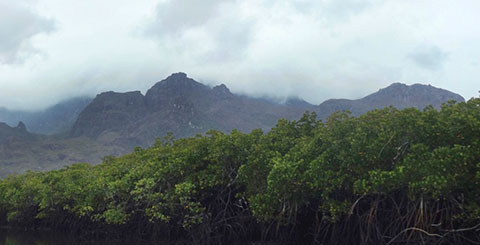 Inland, the mountains back the sugarcane coastal plains, trapping clouds and dropping rain, so that towns like Tully and Babinda vie for the title of the wettest town. (Babinda’s main street happens to be Munro Street!) 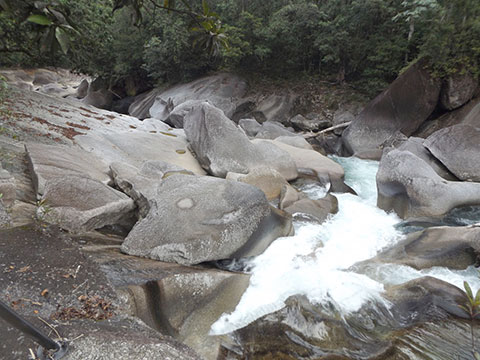 It’s autumn, and I welcome the cooler mornings, but we are also having daily deluges more like tropical summer storms.

By New Year it had become so dry that small native trees were dying, citrus were turning up their toes, my creek had stopped running and its isolated pools were becoming stagnant.

But from January 2 we’ve now totted up nearly 15 inches! 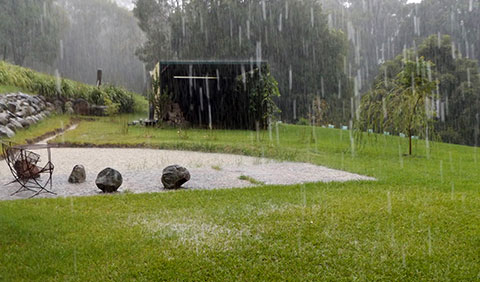 These brief but astonishingly intense autumn rainbursts make a joke of my carefully planned drainage systems, with pop-up waterfalls taking much of my soil down to the creekflats below.

They have filled and overfilled the ‘pond’ that has been bone dry for months.

Up close, they looked more like aquatic mini rats, with their pointy noses and long tails. 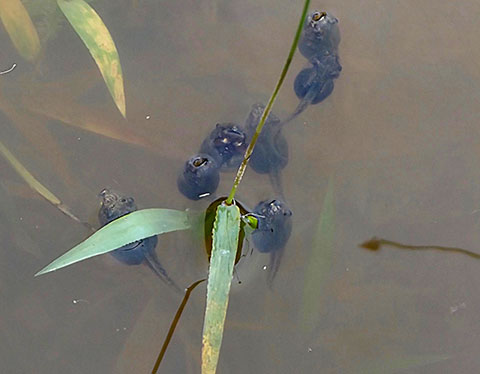 Next day they seemed to be less often swimming under the water than hanging from the surface vertically, blowing bubbles, opening and closing their mouths in air.

Clearly not fish nor rats but growing amphibians… froglets, frogs, soon to be adding to the frog chorus here!

This gorgeous Green Tree Frog is probably the best known frog in Australia, but no less special for that. He’s the source of the very deep and monotonous ‘wark-wark-wark’  that I hear at the bottom of a nearby downpipe, presumably when he reckons rain is coming. 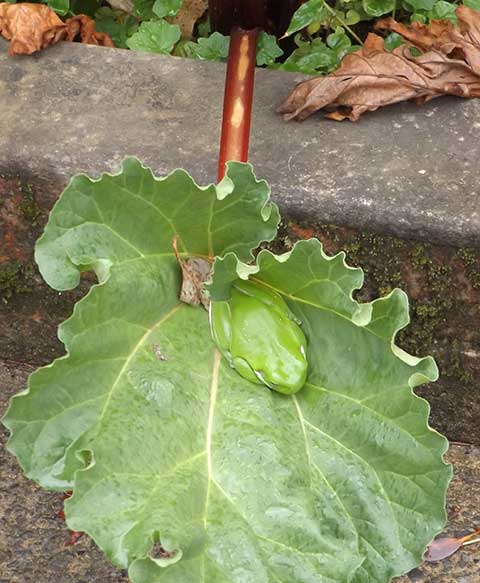 This one was quiet, post-rain and dozing on a rhubarb leaf, for which he was really too heavy as he’d bent it almost to the ground. They can grow up to 15 cm long, so this one is a relative lightweight. 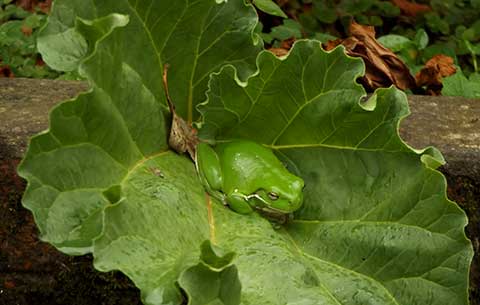 Such a baleful look he gave me as I went closer to take his photo. These plump green beauties are also known as White’s Tree Frogs. I was more familiar with the much smaller Eastern Dwarf Tree Frog, also a green gem of a creature. I welcome all frogs!

As the rain falls, the ground squelches and dams overflow, I thought of a very short story (fiction) I wrote a few years ago…

The raw orange scar of the new dam was ugly. Wherever she stood, it leapt out from the subtle shades of the surrounding unskinned bush to catch in the corners of her eyes and accuse her of its injury. Scalped, disembowelled, the shape of the slope forever broken to make this awkwardly perched dish for catching raindrops.

‘It’s for bushfires,’ he boasted to the local blokes.

‘It’s for bushfires,’ she apologised to those rare visitors with an eye for beauty marred. More often she was apologising silently — to the land itself.

The scar would never heal, since the exposed bedrock clay did not belong to the realm of sunlight, could not grow softening plants. As the dam filled, she planted waterlilies, but their beauty only called attention to the glare of the eroding clay above.

‘It needs some life,’ she said.

‘I could put yabbies in,’ he offered, forgetting that she wouldn’t let him eat them anyway. For peace, and from laziness, he ate her vegetarian food, but he was a carnivore at heart. When they went to town, he secretly indulged — a hasty meat pie or a sneaky steak sandwich.

As he told his mates, she had some weird ideas, but he was on a good wicket here — and he’d always been a sucker for long legs like hers, especially in tight faded jeans, like now.

‘Or I could get some tadpoles from the big dam?’

The big dam was a gentle scoop in the land, its edges well-grassed. Deepened years ago from a natural depression, it had never seemed an interference.

From its shallows they filled a jar with tadpoles, bulging, brownish grey, semi-transparent. She carried them on their brief adventure through the world, tipped them into their new home, then forgot them.

Until the first thundery summer, when it sounded as if the dam had been taken over by a flock of demented sheep.

The big dam being far from the house, they’d never heard its frog chorus. She laughed when she checked the frog book — the tadpoles had to be baby Bleating Tree Frogs. 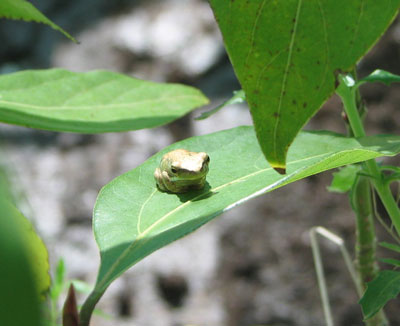 In my rainforest nursery shadehouse the sprinklers come on automatically, keeping it cool and wet and green. Naturally frogs love it.

Snakes like frogs, so as the snake season heats up, I was tidying up in there.

Snake-covering grass and weeds had grown up in between the foam boxes filled with recycled milk carton ‘pots’, uniting the varied seedling trees with a green drapery.

Having been rather neglected this past year, some seedlings had grown right through the bases of the boxes and had to be dug out and planted down in the regenerating gullies at once. Others had to be repotted into fresh milk cartons.

Sorting through one matted box, I spotted this tiny inhabitant. Its colour fitted right in for camouflage, but not its texture: a glistening greenish-brown, mottled in some lights, with distinctly bright green sides and cream cheek stripes.

It wasn’t disposed to move, even as my sorting brought me closer, so I gently tipped its home seedling towards a box that I wouldn’t be touching for a day or so.

There is something very appealing about miniature creatures like this, so perfect in itself, and in its own little world. 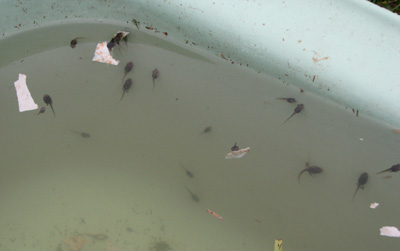 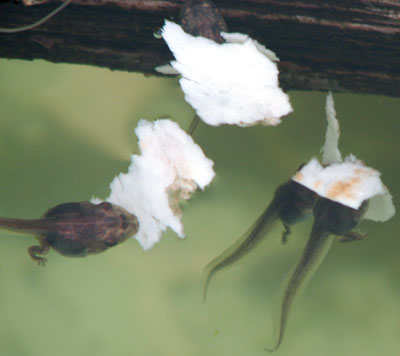