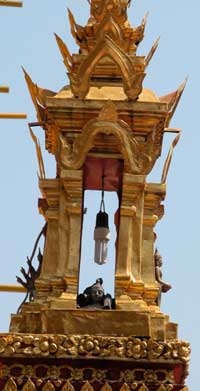 But they have the knack of also living very much in the real and modern world, and we saw energy-saving light globes everywhere – unapologetically even in shrines.

They don’t waste as much as we do in the West; I loved that many garbage bins and their stands, like these pictured below at the Forest Wat, were made from old tyres, turned inside out and cut to suit.

But in the midst of all the beauty of the temples and gardens, there is an awful lot of cement. It reminded me of the old touristy Katoomba in the Blue Mountains of NSW, where fake grottoes of cement were a feature. 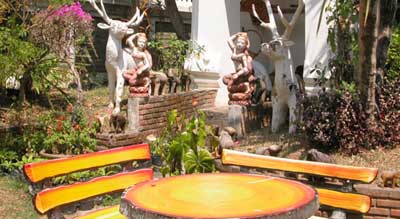 We saw them everywhere, private and public, and our bus passed a place where they make them: hundreds of settings glared at us by the roadside, awaiting buyers. 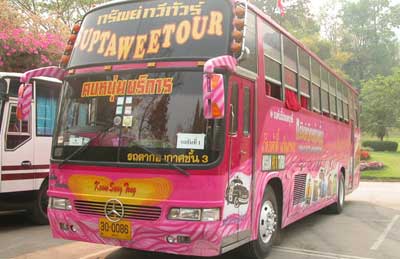 These seem most incongruous for such an aesthetically conscious people, but they do love colour! This tour bus ( not ours) was at a hot springs/national park;  the ‘antennae’ mirrors make them look like giant bugs. 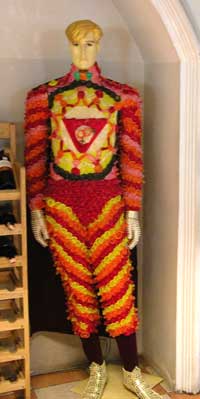 And then there was the knowingly-garish, like at the Condoms and Cabbages restaurant in Chiang Rai, adjoining the Hill Tribes Museum and Education Centre (a better choice than taking a tour to gawk at the downtrodden and much-exploited inhabitants of a hill tribe village!)

Associated with and raising funds for the NGO, the Population and Community Development Association, Cabbages and Condoms had great food plus fun models wearing condoms in a way you probably hadn’t considered!

Their menu promises ‘Our food is guaranteed not to cause pregnancy!’

They also need warm clothes for hill tribe children for the winter if you know any grannies with no-one to knit for. What modern Mum really wants handwashable knits as gifts for their kids anymore? Our Xmas time is their cold season. More information here.