On a visit to my friend Sharyn’s rural property, she showed me these cartoon fairytale fungi under the windbreak of introduced fir trees.

No fairies or elves were sitting on these ones, but perhaps they missed the boat when the species (Amanita muscaria) was introduced to the NSW Blue Mountains for its undeniable decorative qualities.

While vivid and pretty, as tempting as a toffee apple or strawberries and cream, this fungus is toxic.

Sometimes unromantically called Fly Agaric, it’s been used as a fly poison. It has now spread to all Eastern states and Tasmania, where problematically it seems to have adapted to the native beech trees (Nothofagus cunninghamii) and may replace the native fungi. 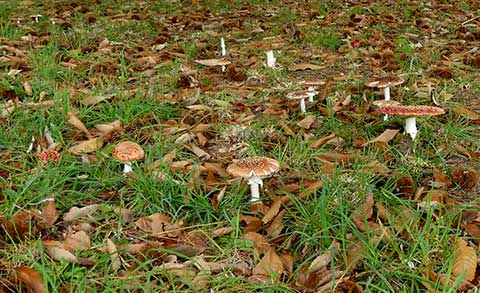 But here the brilliant domes and their expanding plates have also naturalised under the chestnut trees. Note the many fallen spiky, hairy chestnut pods. 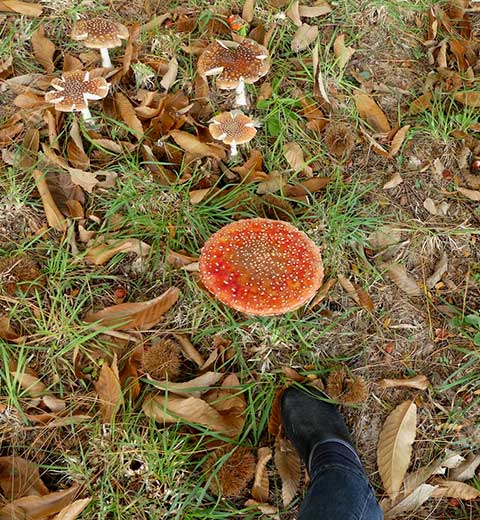 My boot gives an idea of the large size as the fungi caps open, fade to brown, and split into fleshy ‘flowers’. 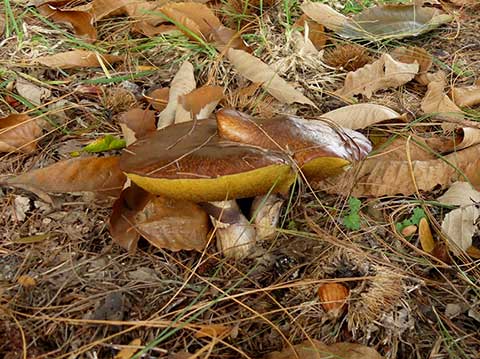 One other foreigner, also brought in for pine trees, lives here with Sharyn’s chestnut trees. Slippery Jack, as it’s known in England, or Suillus Luteus, is visibly slimy and not pretty, but actually is edible. Commonly eaten in Europe, where they peel off the glutinous skin before doing so.