Lately I went to look at the coal mining explosion in Queensland, to see for myself if it was as frighteningly out of control as that in NSW. It is.

This grim industrial scene is on the coast just south of Mackay, Hay Point — not your typical tourist vision of sunny Queensland’s tropical waters.

The coal comes by rail in trains up to 2 km long, uncovered, passing through Central Queenland for up to 300 km to the two major coal loading export terminals, Dalrymple Bay and Hay Point. These extend far out into the bay, 3.85 km and 1.8 km respectively.

As you can see, they can’t load fast enough; I counted 50 ships, and there were probably more obscured further to sea. About 130 million tonnes a year passes through here to fuel climate change elsewhere in the world. 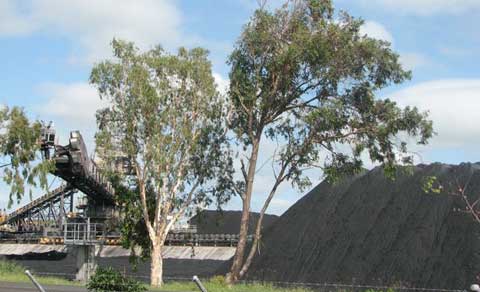 At the viewing parks, large signs boast of the output and the environmental care being taken, and invite me to follow the Mining Trail inland to the mining towns that feed this port. I  did, but I doubt my reaction was the intended one.

Yet tourists who were fortunate enough not to live in coal mining areas might be awed at the novelty of the mechanised scale — or the ugliness.

They wouldn’t want to hang around too long or breathe too deeply, as the coal stockpiles are large and open and right next to the tourist car park. 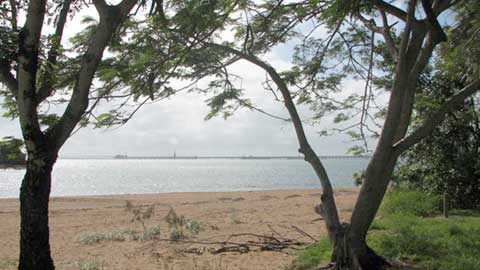 People with no choice in what they breathe or what their seascape looks like still live in the small community of Louisa Creek, just north of the coal terminals. A major industrial development threatens on their other side.

Louisa Creek is a picturesque seaside village, the street now gappy where the houses of those who gave up and sold out have been taken away on trucks.

It is being whittled away, with a few stalwarts attempting to hold the remnant community together and the coal operations to account. 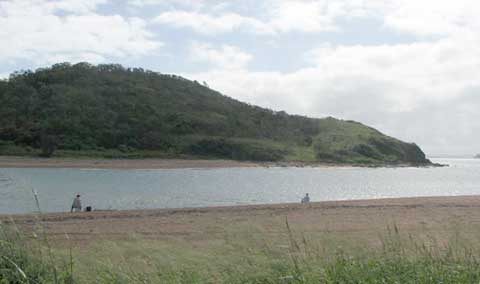 People had chosen to live here for the beauty, the fresh air, the peace and quiet – and not least the fishing – and sacrificed the convenience of shops. There were still a few fishermen by the creek the day I visited, but the peace and quiet no longer exists; I’d be concerned about the air — and I doubt I’d be beach fishing.

The wooded point opposite is Mount Helton Conservation Park, whose immediate rear the industrial area will be nudging.
I fear for Louisa Creek.

My Mining Trail has just begun — and the all-too-familiar anger and sadness for the victims of coal is well ignited.

7 thoughts on “Trashing the tropics”