I swished in over watery roads across the Liverpool Plains yesterday, flying the Eco-Warriors’ flag that I was given in Brisbane last year. This symbol for worldwide cultural change has the the yellow tripod for unity, the red, yellow and black of the Australian Aboriginal flag, representing indigenous cultures worldwide and the beginnings of all humanity, and the green background stands for nature and the environment movement.

As the flag flapped and snapped on my unused UHF aerial, I did feel like a warrior going into battle.

Gunnedah, Boggabri, and headed towards Maules Creek. The directions on the Frontline Action on Coal website are clear and the camp is unmistakable, right where the Forest starts.

A tepee (Murray Drechsler’s home) and tarps and tents large and small, solar panels for the communications, a fireplace (when fire bans aren’t in force) and even a makeshift ‘greenhouse.’ “Community not Coal,” say the signs, and of course Lock the Gate yellow triangles abound.

I made a good impression at once by getting bogged in my first choice of a level spot for the camper, despite having been warned it was soft there. Mea culpa — 4WD false sense of security!

Murray towed me out backwards, I found a firmer spot and set up in the drizzling rain. Lots of conversations about the issues here and beyond around the campfire. Two more supporters arrived.

I am hoping more people come in the next few days before Mr Burke gives his decision on the fate of this Forest from at least one of the mines threatening it.

We need to show that this Forest and this Maules Creek Community matter more than coal. 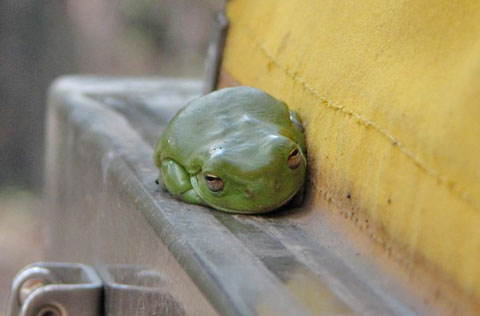 One of the inhabitants has already moved in with me and my camper, just in case his home is earmarked for destruction.

On a drive with Murray today, on one of his unofficial ‘Mystery Dingo Tours’ (0418 754 869). I saw the all-too-familar ugliness of the overburden mountains dominating the landscape.

The Tarrawonga mine wants to expand and so does the Boggabri mine right next to it.

Add to these Whitehaven’s new Maules Creek mine and this area will be well down the path of the Hunter, all balance lost in both land use and culture. Rural will have become industrial, with the human and environmental damage that this brings, despite all the sham ‘conditions’ and the extraordinarily inadequate and seemingly ‘misleading’ offsets proposed.

As we drove back, having been baulked by the last too-deep flooded creek crossing, I saw again the poignant juxtaposition of human lives against the oversized presence of the new neighbours. 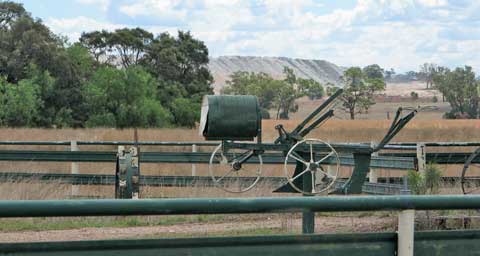 The history of this farm gateway, and what might have been assumed to be its future — now all for naught. The new ‘hills’ are hardly an aesthetic addition to the view, and I’d imagine the noise and dust don’t add to the amenity of life here either.

3 thoughts on “Watching over Leard Forest”