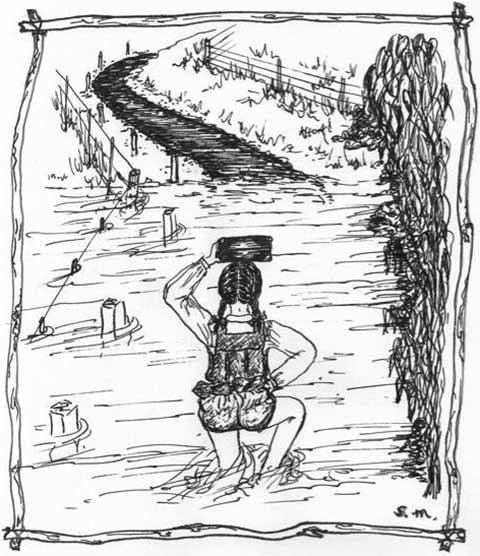 Few modern parents would allow their children to take the risks that I frequently did to get to school in weather; well, perhaps they still would in the country…

From The Woman on the Mountain, Chapter 13: Wet and Wild

By the time I was thirteen I was used to our farm creek flooding, when I had to wade barefoot through knee- to thigh-deep water that covered the lower parts of our track and the road to the bus stop, half a mile away. My school shoes and stockings and a little towel were in my Globite school case, balanced on my head with one hand, the other keeping my tunic tucked up into my navy bloomers.

There was first the hurdle of our rickety wooden bridge, which lost at least one of its round logs each flood, the gap hidden beneath milky brown rushing water. It was a matter of inching forward, feeling with my toes for the gap that might drop me through to certain drowning, as the creek was full of bobbing and whirling branches and logs — more than a match for my feeble dogpaddle.

The farmer’s wife at the house next to the bus stop always let me get dressed on her verandah. I’d dry my cold legs and red feet, still tingling from walking on the sharp gravel of the road, and put on my black cotton stockings. Later in this particular flood school morning, I was commanded to the blackboard by the formidable Sister Augustine. I had passed up the aisle between the desks and was halfway across the open space of lino before the blackboard, when Sister’s sharp Irish voice rang out in the slow-rising-then-fast-falling rhythm she used for my name when I was about to get into trouble: ‘Sha-a-a…ryn Munro! What on earth is that?’ pointing at the floor near my feet.

Everybody stared at a trail of dark red spots that led from my desk to where I stood and where the spots were forming a small pool of what appeared to be blood. This blood was coming from somewhere up under my tunic, and given that menstruation was in the offing for all of us, she could have been more tactful. I was so ignorant it didn’t occur to me, or I’d have been even more embarrassed.

I was publicly commanded to go and find out what the trouble was. As I slunk out the door, she called, ‘Well at least there’s nothing the matter with your blood; it’s a lovely rich red!’ (She also taught biology — and geography, as it was a very small school.) In the toilets I rushed to unclip my suspenders and pull down my stockings. Out rolled a fat, gorged leech, its puncture mark on my thigh, just above where the stockings ended, still steadily oozing blood. It must have been there for hours, as it was now nearly eleven o’clock.

On my return I explained what the cause was, which drew not much more than a general ‘Ugh!’ from the class and a ‘Really!’ from my teacher, who gave me a bandaid and sent me to fetch a mop and bucket to clean up the blood. I had the distinct feeling that I had displayed something too basic, peasant-like, for my superior town classmates.

And I still shudder at leeches!