Springwood is a grazing property south of Emerald in Queensland. It is run — and loved — by Lindsay and Avriel Tyson and their adult children and families, who live there, as Tysons have done since the 1890s. All these photos were taken by Avriel. Springwood is beautiful, well watered — and at risk.

The neighbouring Meteor Park used to be a farming property until Xstrata turned much of it into their Rolleston open-cut coal mine in 2004. The track to Springwood runs close by the long piles of dirt and rock where the homestead and garden used to be. Only the mailbox remains.

The Tysons were worried about the effect on their surface and ground water, the creeks and wetlands, their lake and their bores.

This lake is about 5 miles around and 12 feet deep; they have counted 150 pairs of nesting black swans there — and that’s just what was easily visible.

Their Meteor Creek flows to the Fitzroy River and thence to the sea and the Great Barrier Reef at Rockhampton. 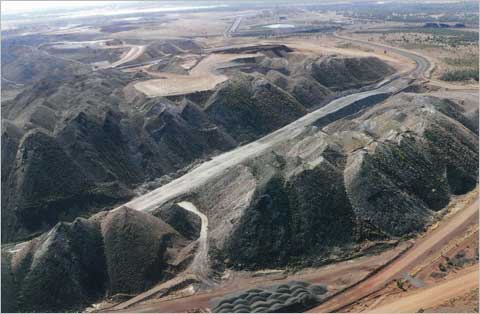 Then, in mid-2009, Xstrata announced to them that they were expanding operations — into Springwood — and they now have a mining lease over 7000 acres of it.

The Rolleston mine is moving into the alluvial plains, easy to mine — and easy to flood.  After heavy rains in early 2010 the Rolleston mine flooded; the banks of its dam burst and the resulting silty water rushed out, over the flooded pits and across the plains and into the creeks and wetlands. Mine silt is not just good clean mud.

They were fined $2000 — about 1.5% of one hour’s takings — for exceeding their water discharge into the Fitzroy catchment. 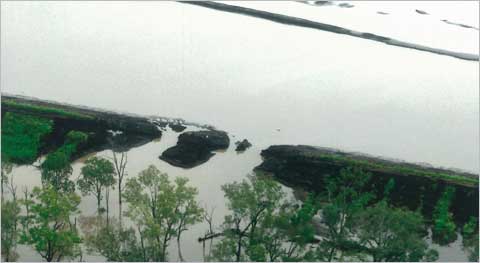 Lindsay says that rainfall is always highly variable here, but can be up to 72 inches, and, given that we are expecting increasingly unpredictable and more extreme weather events, mining ought not be allowed anywhere near areas like this. Groundwater is gleaned and filtered and stored in more complex ways than mines ever acknowledge, but it’s an obviously unacceptable risk to mine alluvial plains, or flood plains or near creeks or rivers….

Mines can’t guarantee against damage to our water, regardless of what they say. Pictures like the one below reminded me of those of U.S. valleys polluted from mountaintop mining spills. 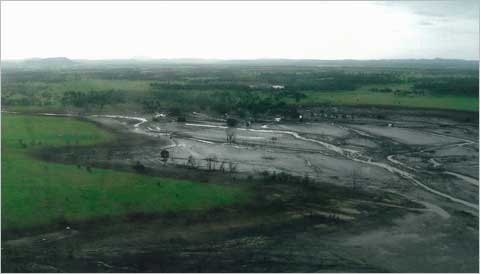 So why are we allowing this? The Tysons are doing their best, stressed but determined, losing time and sleep and business in trying to protect what they know is at risk, against their dominating and often intimidating neighbour, who have all the resources and the mining law on their side.

This is an unfair fight.

8 thoughts on “When the neighbours get pushy”