After 120 years as a town, Acland, only 35 km north of the city of Toowoomba in Queensland, has lost its community and services, almost all its houses and almost all its people.

It’s down to one landowner, Glenn Beutel, and the tenants to whom he has leased the old bakery building for the last decade, plus the occasional looter, visiting sympathiser or shocked and sickened ex-Aclander.

The rest have been cleared out, their house bought up by the (to me) obscenely named New Hope Coal, for their New Acland Coal subsidiary, which runs the New Acland Mine. Having worked their way through Stages 1 and 2, buying up farms in its relentless creep towards the town, New Hope is now awaiting approval of Stage 3, the application for which states they require ‘the removal of the town of Acland’.

How best to make that a non-issue for consent conditions? Why, remove it in advance; hint to the residents that the mine will be on their doorsteps so they’d be better off selling now, start a panicked rush not to be left in a ghost town, get rid of the houses immediately, demolish the brick ones that can’t be moved and insist the buyer of the rest remove them all at once. Erase all traces of human habitation.

It’s a bit hard for a stranger like me to even find Acland, as the sign is gone from the turn-off.

Then pray — or Hope? — for the coincidence of the local Rosalie Council choosing to assume your company will win rather than support the townspeople, hence jump in and prematurely offer you all ‘their’ property, including the historic Acland No 2 underground Mine site and Museum, and the Park, war memorial and all.

You’d think that pretty well seals the fait accompli of Acland being replaced by New Acland, a town by an opencut coal mine.

But New Hope didn’t take into account that a town is more than buildings, a home more than a house, a war memorial more than a lump of polished stone. New Hope doesn’t seem to understand human feelings.

Glenn Beutel has stayed on because he rightly feels that it is premature to pronounce what’s left of Acland as dead until that Stage 3 is approved. If and when that happens will be the time to think about what he might do.

He has continued to care for Tom Doherty Park, Acland’s remaining history, so closely bound up with his family. It was largely due to the voluntary work of his late parents, Thelma May and Wilf, that the Park was  created, that Acland won Queensland’s first statewide Tidy Towns Award and that it was known as the Town of Trees, especially for all the Queensland Bottle Trees they had raised and planted. His mother was the instigator of raising funds to build that war memorial. 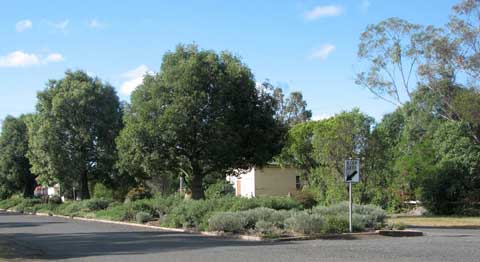 You don’t bury the loved one, no matter how seriously wounded and close to death, while they live and breathe. Acland is very alive still: there may not be many humans left, but plenty of koalas and snakes and lizards and birds and bees and butterflies call it home. 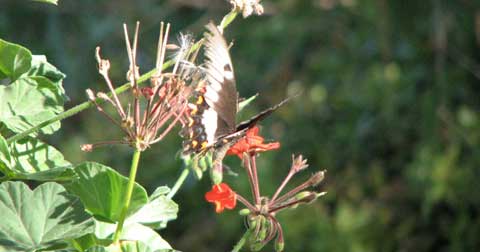 Despite New Hope selling off Bottle Trees for relocation, there is a habitat corridor of trees and shrubs and flowering succulents and geraniums and daisies — Thelma May’s legacy of water-saving plants — left in the Park and the median strip and verges and Glenn’s own garden. 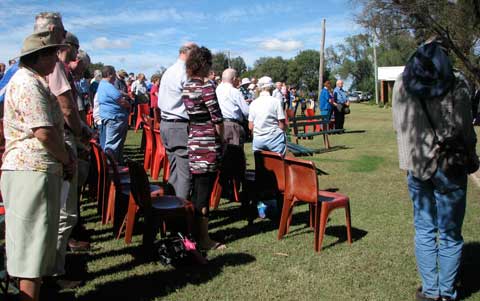 The war memorial has been the focus of an Acland Anzac Day service since it was built in 1991; nobody knows just what New Hope will do with it.  People feared that 2009 might be the last Anzac day in Acland, but things have dragged on in tensions and irresolutions – and so I was there for the 2010 service, along with 200 other people. Not a bad turn up for an almost dead town.

Glenn had the Park and the memorial looking great, his ‘Beutiful’ handmade wreaths of Acland flowers were handed out, ready to be laid at the base of the Roll of Honour.

It was a moving if painfully ironic ceremony, given what had been allowed by the government to happen to Acland, the opposite of the Aussie values, the Australia for which our forefathers had fought. They wouldn’t have believed this possible.

When we all stood for the Last Post, I think most of us would have had those twin sorrows in our minds. 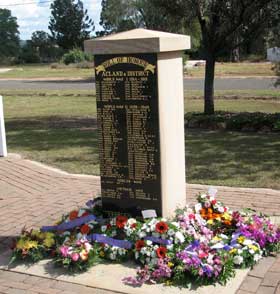 But the worst part was when the New Hope representative stepped forward to lay a wreath. The sudden intensity of the silence and the sharply focused resentment should have felled him on the spot if he had any sensitivity about what his company had done, was doing to these people.  This was not any Anzac Day ceremony; New Hope could have laid a wreath somewhere else if they wanted to pay homage. Like any enemy soldier, he would have acted under orders, but it would surely have occurred to them that as the invaders, the perpetrators, they should not be present as people here grieved, not just for the fallen soldiers, but for the fall of Acland.

Lest we forget indeed. 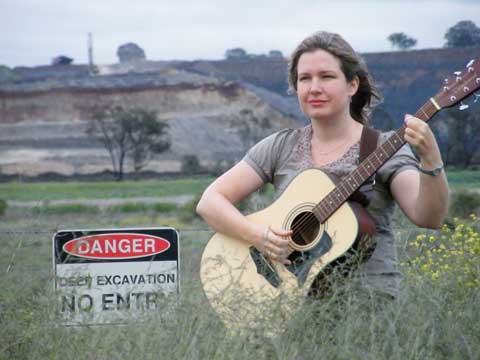 Another who was there that day and who has followed the Acland tragedy for some time is Frida Forsberg. Like me she has been driven to write about it, but Frida is a singer/songwriter so here is her deeply moving tribute to Acland.  She tells me she will be re-recording this more professionally and setting it to a slide show for YouTube later, but I couldn’t wait to share this. Get your hankies ready:

9 thoughts on “Acland – death by coal”