On my way out the other day I noticed  a bright yellow blob on the bark of a fallen tree by the gate. Must get a photo of that, I thought — but I forgot for few days.

When I returned with the camera, the bright yellow had turned orange, with older purple edges and only small oozings, awfully like custard — or worse — showed yellow.

Now I had not seen this before, but from previous investigations into another of the family, I knew it must be a slime mould, Myxomycota. They’re not fungi but tend to be lumped with them.

I had been fascinated that they move about like amoebae, reproducing into perhaps thousands of ‘daughter cells’; then, at some sort of chemical signal, they all get together and make a larger organism.

Some species make such large organisms that a horror movie, The Blob, was inspired by them.

This is one of the most common, worldwide, I had read. It’s in my fungi book as Fuligo septica, with the common name of ‘Flowers of Tan’, but the much less poetic and more apt names I found to be most common elsewhere were ‘Dog vomit mould’ or ‘Scrambled egg mould’! 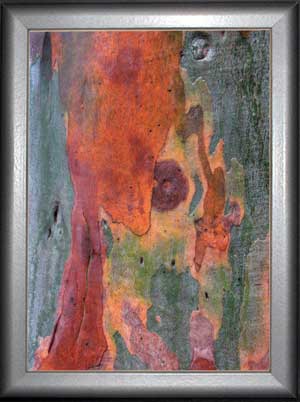 The significance of ultra-abstract art often eludes me; I might appreciate it as design and colour, but it doesn’t speak to me. I don’t warm to it, relate to it, as I can to the merely abstracted, stylised, simplified, where the origin is vaguely discernible. In the latter the artist’s treatment of it stimulates my imagination more than straight realism would.

As pure visual beauty, for shape and colour and flow, I’d hang this one on my wall any day — if I had any space left around the bookshelves and existing paintings and photographs. The uncluttered look is not for me; I want everything I love where I can see it. 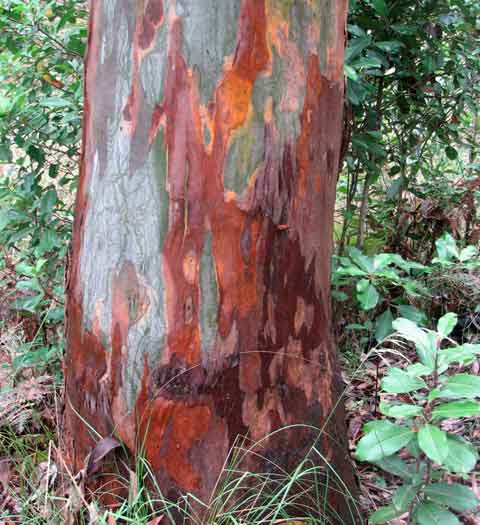 The cabin might be full, but I live in the midst of a forest that can dazzle me with temporary exhibitions of works of art like this one. The paint was fresh and bright after a spell of rain; a week later the colours will dull and fade, or flake off.

The artists are always ‘Anon’ but they belong to a most innovative and talented group called ‘Nature’. 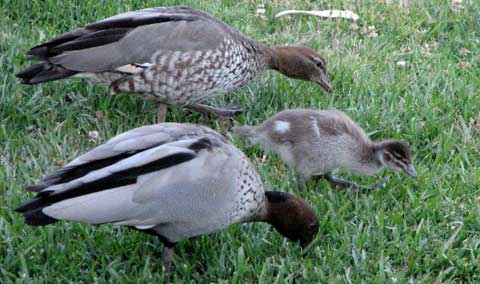 When I first saw the Maned Wood Duck family down near the dam there were five ducklings. The next sighting wasn’t until a week later; they were waddling up the track towards the other dam, so on open ground — and I could only see three babies.

But now the parents have brought the family into the house yard — and there is only one little duckling left. Late last summer, when the pair first ventured into my yard, they had a young duck, a teenager, with them. Maybe it was one of a larger brood to begin with too.

Now the trio are hanging about my cabin, feeding, seeking shade, not moving away when I go up and down the steps to the verandah. In fact, they are using the steps as well, judging from the deposits left behind. 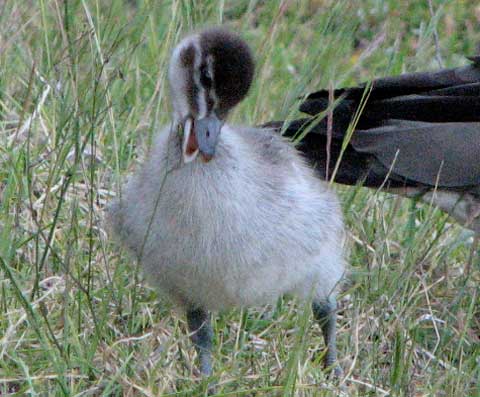 The duckling is as fluffy and cute as a duckling can be, with quaint antics like standing on one leg, stretching the other out behind and shaking it as if part of a dance routine

They also like sitting under the massive fountain of my banksia rose which sweeps to the ground and makes a dim cool cubby for a duck family with one precious child to protect. I wish them luck.

P.S. Since I wrote this, the parents have been in the yard several times — unaccompanied. I am afraid my good wishes were not enough to save the last duckling from its fate. 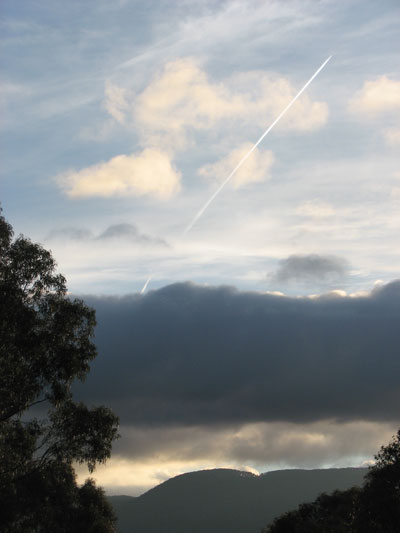 Very early one morning I happened to catch this connection between nature and man.

The heavy cloud was just cruising, waiting for the sun to warm it up, when a cheeky jet plane shot right through the middle of it and up into the real daylight.

There it shone, a silver streak that made my cloud look like it was wired for sound and sporting a long antenna.

Or else being towed by the jet – a cloud on a string. 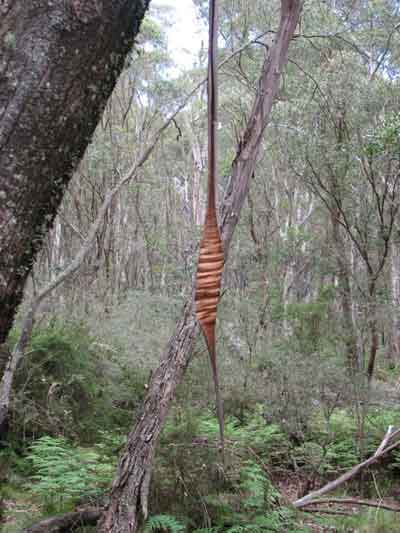 In the Giant Snow Gum Walk in Coolah Tops National Park, I saw this strange suspended sculpture ahead. A cocoon?

Pink one side, elephant grey on the other, it proved to be a strip of intensely wrinkled bark. I could see the mould that made it on the tree trunk above.

Artlessly natural, as we say, or naturally arty? 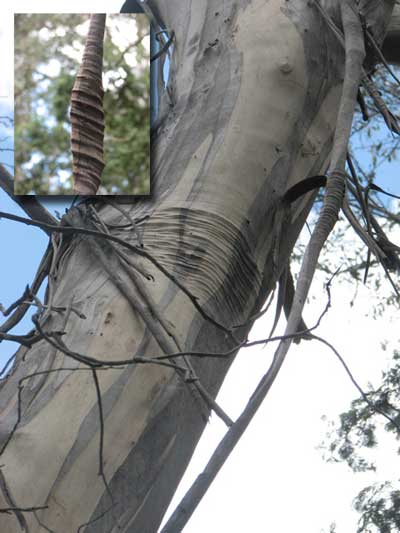 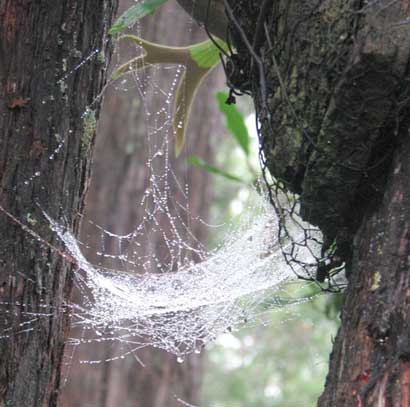 Sometimes Nature throws up a combination that takes my breath away with its beauty.

In the wet wet world of my mountain this year, water droplets are nothing special, yet one morning they got together with a complex and multi-level spider’s web to create a stunner.

Diamonds, pearls, and the finest silver wire, netted and looped and swagged between a stringybark tree and the elkhorn I have growing on another stringy close by.

Half an hour later and the jewels had evaporated. It was ‘just’ an admirable web.

Coincidentally, these tree trunks rise from the very spot chosen by the slime moulds of a few months ago.

Given that this is only a few metres uphill from my outdoor, door-less toilet, is it any wonder that I prefer not to have a door? Think what I’d miss!

As my mountain is not of sandstone, the sandstone ridges and gorges through which the Goulburn River meanders (when it isn’t rushing along in flood!) provided visual treats that no manmade sculptures could rival. The range was staggering. 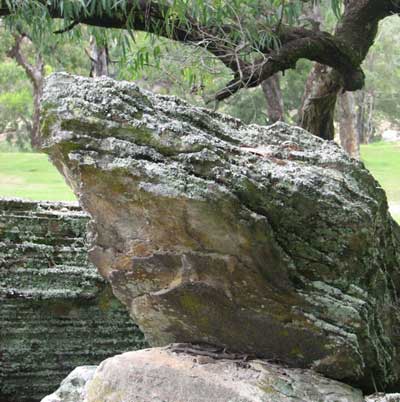 Mighty boulders, long broken off, rolled far from their parent cliffs, rested at odd angles in a sea of grass, gathering lichen and inviting fancies of petrified creatures. 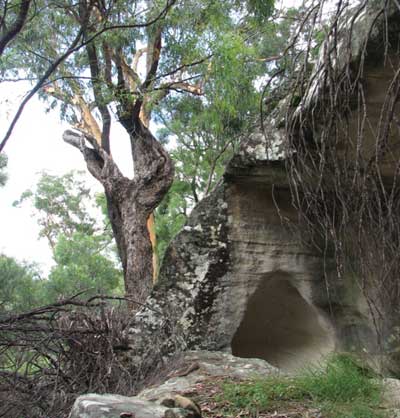 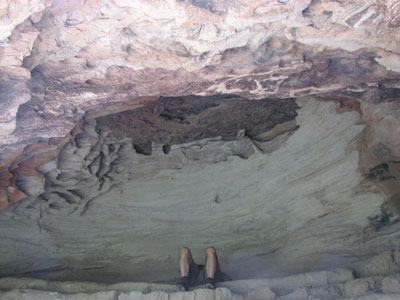 Less common were the very large caves, stepped, sand-floored, roofed with intricate honeycombs of differing colours and materials – and these must have once offered shelter for humans. 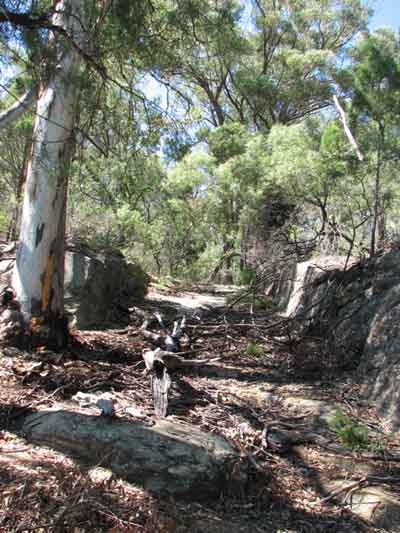 And humans had been here. Elsewhere in the National Park there are apparently caves with Aboriginal paintings on the walls. There was evidence of later occupation, and typically, of greater impact.

Off a management track, an uphill offshoot, faint and overgrown, became an old wagon track, hewn – not blasted – out of the rock to reach the ridge and continue over the plateau to the next valley.

I hope that determined settler found the effort was worth it. The rock remains indifferent to that blip in its time.