I have always wanted to visit these mountains. About 100 kilometres from Toowoomba, they are home to the world’s largest stand of the ancient and mighty Bunya Pines.

Partly because I love mountains, and partly because everything about these trees is so impressive, from their football sized cones and seriously spiky leaves to the legendary feasts they provided for the indigenous people. I’d seen them in parks and around homesteads, but never ‘in the wild’.

The Bunya Mountains are like an island surrounded by plains and cleared farming land. They are a refuge of biodiversity, harbouring ancient species, distinct plant and animal communities and more than 30 rare and threatened species.

The road up to the 1100 metre-high Park is too steep for caravans so the camping area held mainly tents and small camper trailers – and my Gypsy slide-on camper. You can see the dome-shaped Bunyas (Araucaria bidwillii) rising above the rainforest close by.

It’s an odd place, with many private alpine-style chalets and resorts up there as well as the Park.

They must be there for the cooler climate — and the wonderful walks. 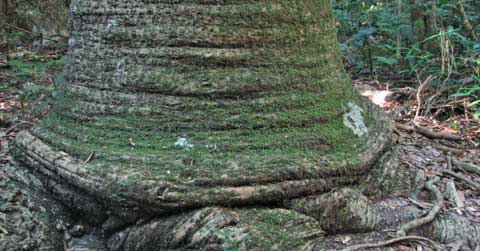 I set out early the first morning. It was strange to see ‘pines’ in a rainforest, but I read that the Araucarias  were a major part of our forests in wetter times. The Bunyas are there in plenty still, with massive wrinkled elephantine feet holding them firmly as they soar out of sight. 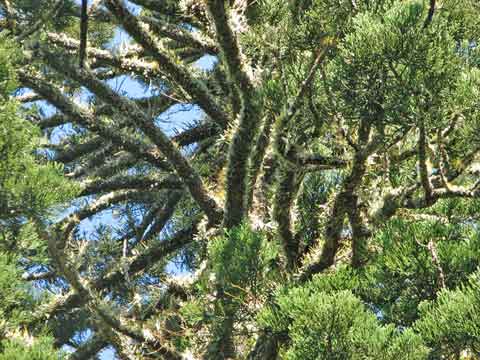 They do their part in bearing the rich diversity of plants, of ferns and lichens and orchids.

There would have been plenty of Hoop Pines (Araucaria cunninghami) here too but I only saw a few, as they and the red cedars were most desired by the timbercutters. Hoop pines are not as round-topped, and their leaves and small seeds are not to be feared. Apparently they take their name from their hoop-shaped bark sheddings. 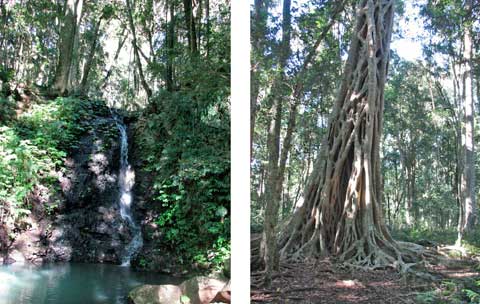 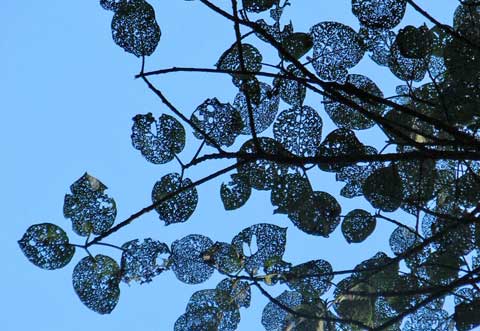 It was a beautiful rainforest walk, past ferns and vines, a canopy of mysterious trees silhouetted against a bright sky, and magnificently efficient and slightly scary strangler figs, punctuated by creeks and small waterfalls running into pebble-bottomed pools. Because it was early, I had its green-lit peace all to myself.