Last Sunday, April 19, hundreds of small groups of people parked their vehicles at staggered spots along 2000kms of the Newell and Pacific Highways.

They were forming the longest anti-CSG protest ever. Amazingly, it all came about in three short weeks of Facebook frenzy.

I had made a reconnaissance trip a few days earlier and found a spot just north of Taree, near Moorland, where we would be visible from traffic heading both north and south on this divided four lane highway.

It was also safe, as we could park on a local road just behind.

That’s my ute (above), with a sign painted on an old curtain by my grandchildren and a friend of theirs — all local and all dependent on the Manning water supply that AGL is risking, and already contaminating, with their CSG project at Gloucester.

The blue sign was lent to me by Richard, a fellow Upper Lansdowne resident; almost every gate out there bears a Lock the Gate No Trespass sign.

It was raining when we started at 10 am, but fined up during the day until it ended with a mighty storm at 2 pm when were due to finish. So there was varying divesting of raincoats and ponchos and furling of brollies, then unfurling them or donning hats to cope with the sun as it set us all to stew and steam. 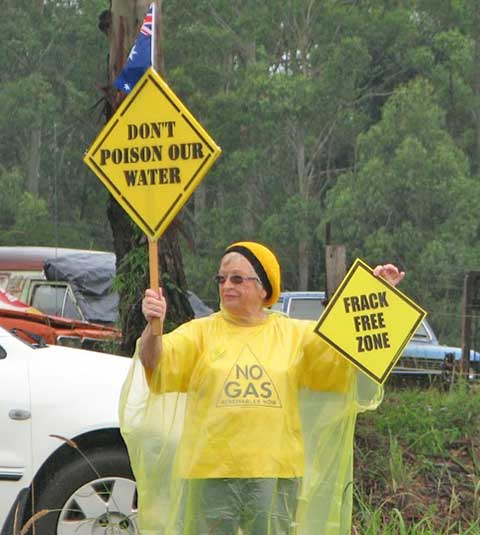 About thirteen stalwarts joined me there for the duration, all good-humoured and keen. One very familiar face was Margaret, Knitting Nanna and member of Manning Clean Water Action Group (as were quite a few of the others). She seems to be at any event or action; a real trouper.

And may I add that not one of the thirteen was a ‘paid or professional protester’.

Everyone got a buzz from the huge number of supportive beeps and hoots and waves and thumbs-up from both sides of the road. Very few trucks sped past without blasting their horns. I was greatly enlightened as to the wide variety of horns, not to mention the ingenuity in patterns to be played on them. 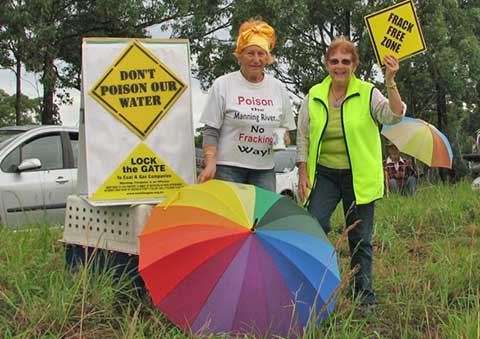 Teresa (left) and Nancy (right) were highly visible, although Teresa’s energetic antics would have attracted attention no matter what she was wearing! It was all part of the goodwill of the day. 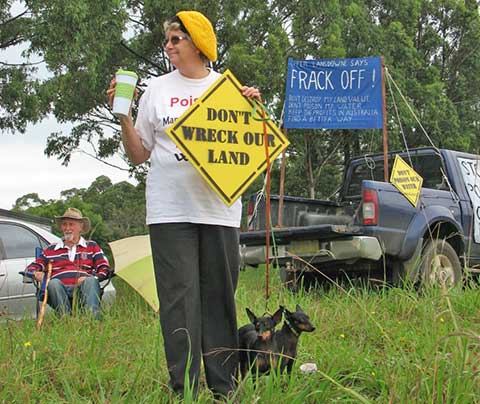 Elizabeth brought her two little dogs along to be part of the action, while Teresa’s partner Brian (left) supported with tea and coffee and biscuits from the rear. 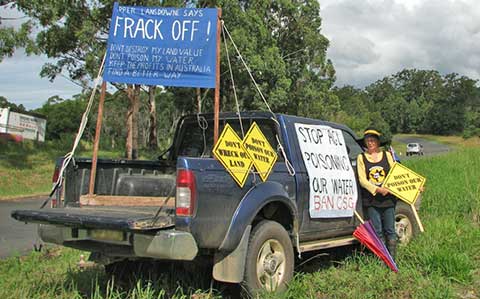 But it wasn’t just Teresa who was doing a bit of a dance; I hadn’t realised there were lots of small and very bitey ants in residence on this strip of grass.

I was in gum boots and Elizabeth did have closed boots, but others were on constant antwatch, jiggling and slapping and retreating to the road beyond for relief. Talk about suffering for the cause!