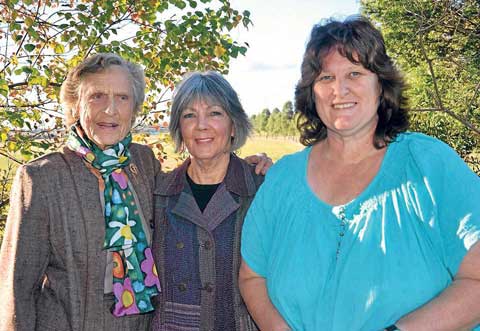 This is me and the heroines of my Chapter One, ‘Living with open cuts’: Wendy Bowman, The Genteel Guerilla General’, (left) and Deidre Olofsson, ‘Deidre the Dauntless’. They are still fighting for justice and survival, and we were at Wendy’s home, ‘Rosedale’, where I spoke at a fundraiser for their court case.
Photo courtesy of the Singleton Argus, from an article by Editor Di Sneddon, 28th May 2013.

Many of my readers will remember the posts I’ve done about the long-suffering villagers of Camberwell, just 15 kms north of Singleton in the NSW Hunter Valley: ‘Camberwell — in crisis from coal’ and ‘Hopes for a saner 2012.’

I told you that if the Planning Assessment Commission (PAC) rejected this Ashton S-E open cut proposal by Chinese miner Yancoal, that would be the end of the village. This was on the grounds of water and health.

I didn’t tell you what happened after their victory.

The mining company, with the backing of the Department of Planning, of course appealed the decision in the Land and Environment Court, which sent the decision back so that a second PAC could assess the proposal.

Somehow, suddenly, the serious water issues for Glennies Creek — on which the Hunter River below here relies, as do the famous Hunter’s vineyards and other irrigators — were not so important for the NSW Office of Water.

The Department of Health remains opposed to the project. Dust levels are already shocking in this part of the Hunter; far more kids in the Singleton area (1 in 3) have reduced lung function than the state average (1 in 9).

The Hunter Environment Lobby (HEL) has now launched an appeal against that second approval and the case goes to court on August 26th. They need more funds to pay for their legal team and the excellent expert witnesses they have assembled, even though many are providing services for much less than usual.

This case will have far wider impacts than for Camberwell.

So, on a sunny Saturday 25th May, HEL had a fundraiser garden party at Wendy’s ‘Rosedale’, right where the open cut would be. It’s Wendy’s second dairying property and home as she was forced off her first by another open cut.

Cakes were in abundance, auctions and raffles were heId; I donated a box of Rich Land, Wasteland books.

Can you help, in even a small way?

Any donation above $2 can be claimed against your income tax. Please support the legal challenge to the Ashton S-E Open Cut by downloading and printing the donation form here.