Last Sunday 60,000 misguided Australians got together in their towns and cities and rural parks to let Mr Abbott know they wanted action on the climate emergency.

He could have told them that it’s far more urgent to stop the boats than to stop global warming and impacts like super typhoons.

I went to the Port Stephens gathering, which was, surprisingly, admirably organised via GetUp by Maria, a local schoolgirl. It was a grey morning, lightly drizzling the whole time and I hoped her effort would be rewarded by at least 20 turning up.

In the end it was more like 60, all heartened to know that others cared enough to come. From greybeards to kids, some bearing home-made signs, many wearing ‘heatwave’ colours… and most bringing brollies. 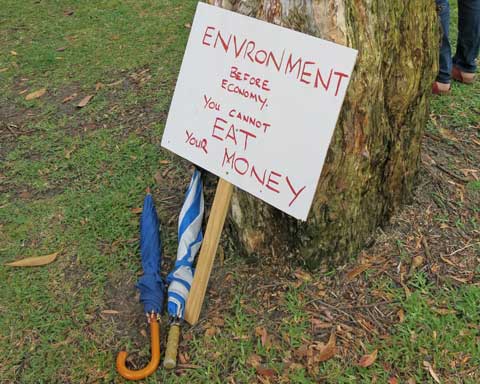 The patient and articulate Maria persevered with getting people to cut out letters to paste on increasingly damp pages.

Trying to assemble the message was harder, but from atop a picnic table, she managed to herd the bedraggled cats and their letters to form the message: ‘Nelson Bay wants climate action’.

You got that, Tony?

Bravo to Maria and the 59,000 others who give me hope we will leave a future for our grandchildren.

But where were the rest of you?