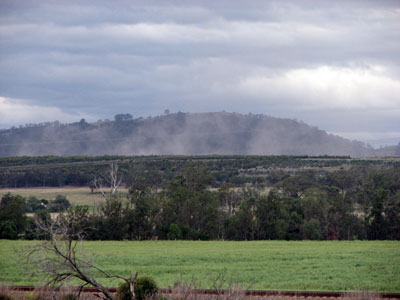 Driving up the New England Highway to Muswellbrook, in the heart of coalmine country, I noticed that, as always, the air was clear and fresh. The mines are obviously doing what they’re supposed to, which is keep any effects within the site area.

Thus when I look towards that hidden distant mine void, the airborne dust I see is either an illusion, or it will turn around when it realises the wind is blowing it off site.

So reassuring that they are in control of their dust. 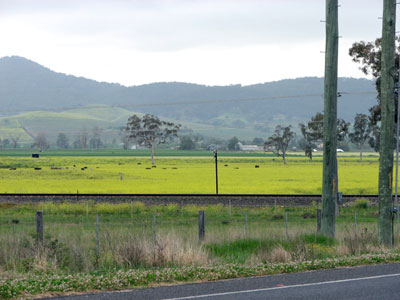 The other comforting evidence that our masters keep their word and know what they’re talking about regards canola.

This is especially important because I understand they are considering removing the ban on GM canola crops in NSW. We are assured no GM crops would escape and infect other crops.

Funny though, how one good burst of rain has sent canola into frantic growth all up and down the roadsides and railway lines, over the paddocks and up the hillsides, if you can peer through the murk to see the hills.

Yellow, yellow everywhere, and none of it intentionally sown in this non-canola-growing area. I had to ask a local to check my disbelief, so dense and vast was the spread of canola in paddocks.

The fine seed was apparently in stockfeed mix used extensively here during the drought. Canola is the new feral here; it beats fireweed and capeweed as the Yellow Peril this season for sure. How much wider will it have spread next year?

But of course GM canola will be under control.