As the last red leaves fell from the Glory Vine, this exquisite little nest, round as tennis ball and about the same size, was revealed. It was knitted with gossamer threads and moss onto three twigs, like grandma making a sock by going round and round on her three needles.

Quite empty, it and its twiggy frame now adorn my verandah collection. 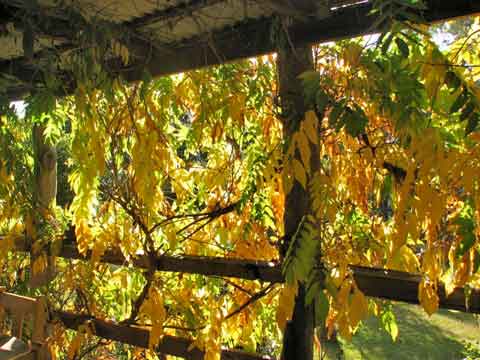 The other verandah drapery is the wisteria, the leaves now mainly butter yellow, edging to amber before they fall. It fills the window behind my desk, and as the afternoon light behind them sets them aglow it helps me bear having to be in here at the computer instead of outdoors on such beautiful still sunny days. 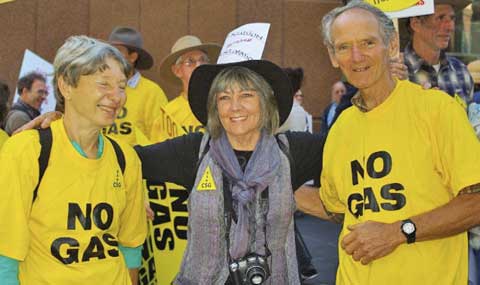 But yellow is also the adamant all-year-round colour of the NO GAS groups in many areas, like Bunnan and Merriwa in the Hunter.  The T-shirts are bold and un-missable, with the simplest of messages worn defiantly centre front.

This photo was taken at the May 1 Rally by friend Sandra Stewart, and sent on to me later. It’s me and my two good friends Alyson Shepherd and Doug Blackwell; although they’ve moved to the north coast from the Merriwa district, they came down to join old mates at the rally.