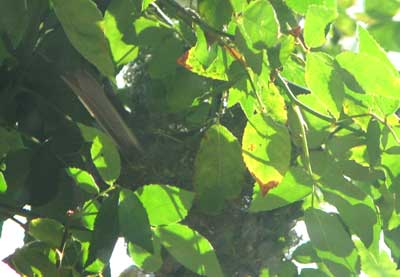 The Yellow-faced Honeyeaters are definitely building their nest in the Crepuscule climbing rose outside my window.

They are very quick to dash in and add to it, one at a time, and they don’t stay in there long.

The whole branch they’ve chosen is suspended, loosely swinging, so hopefully other feathered predators won’t be able to get at it.

One friarbird, who’s also collecting string and such for its nest, has been hovering around, flapping frantically in mid-air and causing the honeyeater to fuss and chatter at it.

You can just make out the tail of one poking up from the nest.

I can’t open my casement window much now as a friend noticed that they weren’t coming to the branch when I had the window in front of it wide open.

Obviously the immediate surroundings had changed too much and made them wary. They resumed when I latched it closer to the frame. 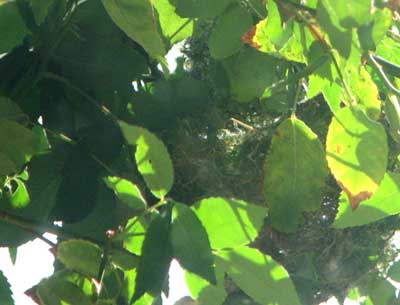 This nest seems to be mostly composed of lichen.

No mud as in the swallows’ construction.

They must be just weaving and hoping.