In my yard, amidst the green of grass, the brown of strips of windblown bark or fallen leaves, and the black of wallaby poo, you rarely see the colour yellow. Especially a yellow so bright as to resemble plastic.

Naturally it drew me to closer inspection, which revealed small blobs of desiccated plastic. 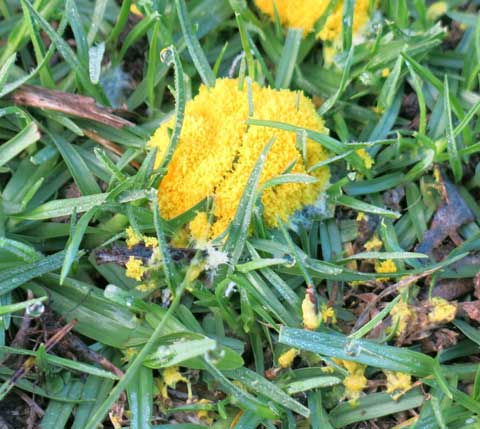 Although I haven’t seen it here, this one appears to be the common Fuligo septica, ‘Flowers of Tan’, ‘resembling a solidifed mass of scrambled egg, often with a small whitish trail leading to it’ says my fungi book. Not that slime moulds are classed with fungi anymore, but I don’t have a book on them alone.

Unlike fungi, they get together on a chemical signal and move, to ingest food like an amoeba.