Last week I travelled north to Queensland’s Atherton Tableland for a wedding. It was a laborious trip, sleeplessly overnight by train to Brisbane, and then by plane to Cairns. My friend Inge met me there and drove me back to her house near Lake Tinaroo.

It’s actually two pole houses, sensibly built in the middle of the two acre bush block, so the wildlife love it — and so do human visitors.

Sitting on the verandah at each bookend of the day, I saw many of the locals ambling through her garden.

I was told that this male (above) is a Bridled Nailtail Wallaby, of which there is a healthy group here, but the species is much diminished in locality and size and is now rare in  much of its former range. 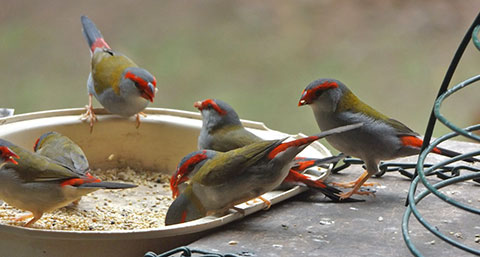 Dozens of Red-browed Finches bustled about the feeder tray, alternating eating with cooling off in the nearby bird bath, flapping and splashing themselves and each other. 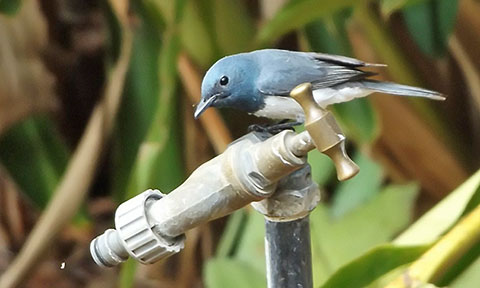 The adjacent tap provided a perch for a procession of birds. several of which were unusual.

A bird-cluey friend thinks this is a Leaden Flycatcher, looking more blue and less flat-headed than my bird book shows. 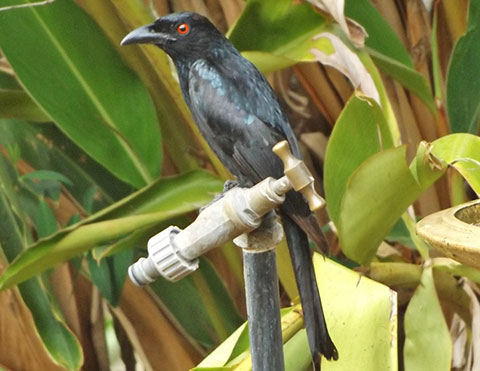 This rather intimidating bird is the magnificent and absurdly named Spangled Drongo. Its iridescence and spangles are not so obvious here as its vivid red eye, nor is its mermaid-forked and scalloped tail. This Drongo is the sole Australian species, and is migratory. 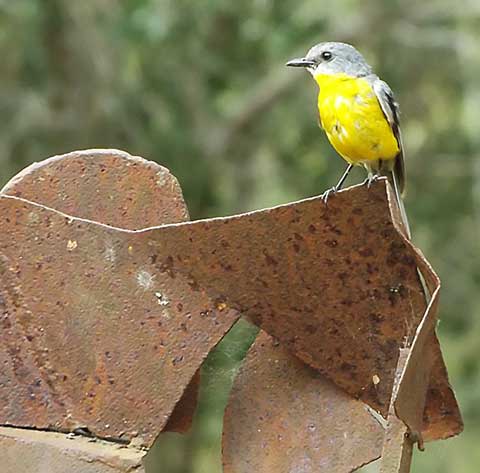 Northern Yellow Robins are as cute as those down south, and as inquisitive. This one fancied the iron sculpture in Inge’s garden.

The Tableland itself proved to be amazingly diverse, from lush red soil agricultural plains to ancient volcanoes and dramatic waterfalls, from rainforest to dry scrub; tropical fruits and vegetables were offered at roadside stalls and at markets in the many quaint and often historic towns, like Yungaburra and Herberton. 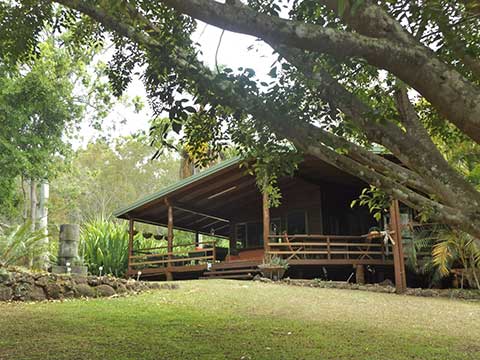 By the way, Inge is gearing up to offer the house above, from which I watched all this wildlife, for AirBnB stays.